A Roman sarcophagus is discovered doing duty as flower pot 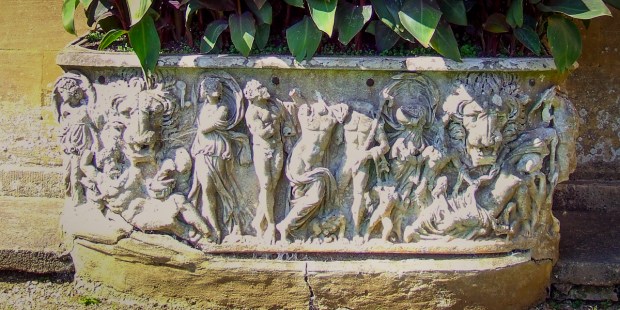 An antiques expert spotted the ancient vessel, which was being used as a planter for over a century.

For the last 100 years visitors to Blenheim Palace, a historic country house (and birthplace of Winston Churchill) in Oxfordshire, England, may — or may not — have noticed what appeared to be a decorative planter on the estate’s grounds.

In fact, the marble vessel, which had been used to plant tulips, was no ordinary flower pot but a Roman sarcophagus dating back to the year 300, and worth more than $350,000, according to The Telegraph.

The discovery was made by an antiques expert who was inspecting the estate for insurance purposes, and happened to notice the treasure hiding in plain sight. According to the report, “the expert spotted the the sarcophagus out of the corner of his eye and made a beeline for it.”

Decorated with bas-relief carvings depicting Dionysian revelry, the piece was appreciated for its artistry even before its provenance was discovered. “We always thought it was a beautiful sculpture,” the estate’s house manager Kate Ballenger told The Telegraph, “but we were not aware of the fact it was a Roman sarcophagus.”

The ancient coffin was acquired by the 5th Duke of Marlborough about 200 years ago. Before it was put to use as a planter, it is said to have been part of “an elaborate water feature.”

It has now been restored and repaired, and is safely out of the elements and on display inside the palace, where palace officials hope it will remain “for centuries to come.”