What I learned from a toxic friendship 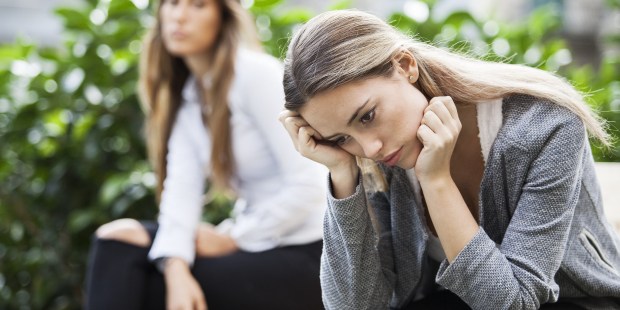 How to identify toxic people, and what to do when you feel tied to one.

It starts innocently enough; your initial get togethers are fun, maybe even refreshingly different from your other friendships. But at some point, you start feeling badly.

Maybe your friend starts to downplay the things you say (your ideas, your concerns, your triumphs), and highlights his or her own ideas, concerns and good qualities, making them seem more important. At first, it’s natural to forgive: we all get self-involved sometimes. So you probably give your friend another chance, and you try to push past any subtle comments you dislike — you want to believe they “didn’t mean it like that.”

Read more: A guide to dealing with people you don't like

But if weeks go by and your new friend only becomes increasingly cynical, your friendship may be headed in the wrong direction. Sometimes she might be nice, encouraging you to confide in her, talk, and rebuild the relationship. But then she looks at you condescendingly, or caustically puts down something that she knows is important to you. You never know what to expect.

When friendships turn a little sour, it’s easy to wonder if there’s something wrong with you. Maybe you really are a little lame, you think. Do you feel insecure when she gives you a look of disapproval? Do you feel relief when she praises you? Those self-doubt feelings in a friendship are usually red flags of a toxic friendship. And if you find yourself in one, you’ll be better off ending it.

But I have bad news for you: this friendship won’t end by itself. And that will be tricky, because your friend benefits from the relationship: Her own self-esteem is boosted by deprecating you. It’s possible she’s envious of something you have, a common (if not conscious) motivation for this kind of behavior.

I’ll admit, I’ve been in this kind of toxic relationship many times: eight to be exact. It’s happened inside my family, in school, in college, and at work. I, too, have wondered What’s wrong with me? I blamed myself. But, finally, I saw the situation from a different perspective.

Dealing with a ‘strong’ narcissus personality

So first, remind yourself that this bad behavior from your friend is not justified, and is not your fault. People who find ways to hurt you at every turn, devalue you, and/or elevate themselves (often in a very exaggerated way), are people who cannot cope with something about themselves, even if they aren’t aware of the reason. Often these people have narcissistic personalities, pushing away their insecurities and transferring the blame for their failures onto others. They feel a constant need to be the most valuable, attractive and important person in the room.

But don’t let appearances fool you. Although externally this personality type presents a strong and absolute persona, somewhere inside they’re just as vulnerable as everyone else, if not more so. That’s why they need to feel valuable, attractive and important, and they fight for it as they know how.

Read more: My unlikely friendship with a lesbian mother

I have a personal example of dealing with this kind of a person. In college, I was in a group with a person who had difficulty accepting my ambitious plans, and, later, coming to terms with my success. I worked hard for everything I got, but she didn’t see the situation rationally. She tried to explain it in a way where she was the injured one. Very often—during class and meetings—she would whisper very snide remarks to me. When we talked with friends, she would undermine everything I said. She seemed to need to discredit anything I said, and she even suggested to friends that all my achievements were the result of fraud. All the while assuming the title of my friend.

One evening, when I nearly had a nervous breakdown and cried, I said to myself: enough. And just like that it happened. I stopped talking to her.

I started to very consistently and clearly ignore her. I didn’t see her; I didn’t hear her; I didn’t react to any of her numerous provocations. After some time, she asked me what my problem is, and all I said was: “Figure it out.” After that, we never met again, but I still remember the panic I felt that first day of silence. I am not perfect, but sensitivity, empathy, and kindness are my strengths. I am nice to people because I like to be kind to others. And I realized I didn’t need to be treated unkindly for that fact. It was the first time in my life that I set a healthy boundary—a boundary of respect to myself.

Is it fair to cut someone off like that?

Dealing with toxic people is a huge challenge, but so is the struggle for your own dignity and the right to be yourself. There are different degrees of toxic relationships. Their healing should always start with a conversation, an explanation of the problem, and asking for a change of behavior. But when nothing works, and our own emotional state becomes fragile and dependent on someone else’s moods, we need to draw the line.

Read more: The 8 types of women you need in your friend tribe

So send a clear message: I do not tolerate your behavior. I do not tolerate the way you push me, and undermine me. Taking care of yourself, your development and your emotional and spiritual maturity is always a very honest approach. And in my opinion, it’s the best one, too.