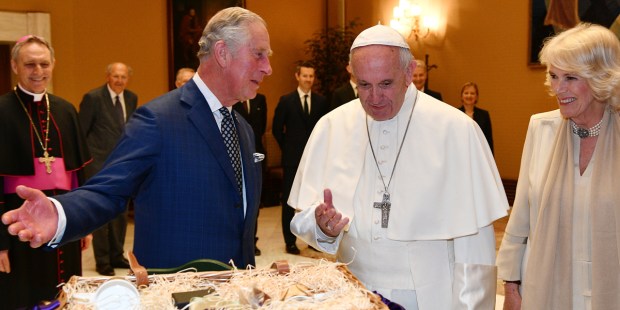 The British heir to the throne, and his wife the Duchess of Cornwall, meet Pope Francis at the Vatican

VATICAN CITY — Pope Francis met with Prince Charles, Prince of Wales, and his wife Camilla Rosemary Shand, Duchess of Cornwall, on Tuesday at the Vatican.

The pope received the prince and duchess in the auletta [little hall] of the Paul VI Hall. It was the royal couple’s first meeting with Pope Francis, and lasted a half an hour.

Their discussion covered a number of “topics of mutual interest,” the British Embassy to the Holy See reported. The topics likely included climate change and the persecution of Christians, particularly in the Middle East.

According to reports, “The Prince of Wales has become a keen supporter of Aid to the Church in Need, making generous donations to support its work, hosting refugees at his homes in Scotland and London, and speaking frequently about the plight of people uprooted from their homes in Iraq and Syria in particular.”

During the visit, their Royal Highnesses presented the Pope with a basket of food from the Royal Estate at Highgrove.

“It is difficult to know what to offer Your Holiness,” Prince Charles said.  “It may come in handy, or someone else might like it,” suggesting the food might be shared with the poor.

Pope Francis presented the Royal Highnesses with a bronze representation of an olive branch. “No matter where you go, always be a man of peace,” Pope Francis told Prince Charles.

The pope also gave the prince and duchess a copy of his Apostolic Exhortations Evangelii Gaudium (2013) and Amoris Laetitia (2016), as well as the Encyclical Laudato si’ (2015).

Environmental issues were a theme of the visit, the British Embassy to the Holy See noted, and His Royal Highness joined a round-table discussion with senior Holy See officials, including Cardinal Peter Turkson, prefect of the new dicastery for Promoting Integral Human Development.

During their visit to the Vatican, Prince Charles and Duchess Camilla also visited the Vatican Secret Archives and the Vatican Library, and were able to see a few of the valuable historic documents held in both collections.

Prior to their audience with the pope, the prince and duchess also met many of the British community working at the Holy See at a small reception at the Venerable English College, the residence for British seminaries in Rome.

The royals are on a 5-day visit to Rome. On Sunday, Prince Charles toured the earthquake hit town of Amatrice in central Italy, walking amid the rubble and talking to some of the survivors of the quake that killed nearly 300 people and left thousands of others homeless.

Prince Charles and the Duchess of Cornwall last visited the Vatican in 2009 when they had a private audience with Benedict XVI, prior to his historic visit to Great Britain in 2010.

And on April 3, 2014, Queen Elizabeth, accompanied by Prince Philip, Duke of Edinburgh, was received by Pope Francis at the Vatican.

During the visit, the Pope gave the Queen a blue orb decorated with a silver cross for her great grandson, Prince George, who at the time was only eight months old.

“It is for the little boy,” Pope Francis told the Queen in his native Spanish, as he pointed to the orb — a traditional emblem of the power of Christian monarchs.

For centuries, royal dynasties have used orbs to represent their dominion, while the cross on top of it symbolizes their Christian faith — a fitting gift for a child who will one day be King and Defender of the Faith.

The orb sat on a silver base inscribed with the English words: “Pope Francis to His Royal Highness Prince George of Cambridge.”

“That’s very nice, he will be thrilled,” the Queen said. Perhaps realizing that the heavy orb topped by a cross with four sharp points was not entirely suitable for a baby, she added: “When he’s a little older.”