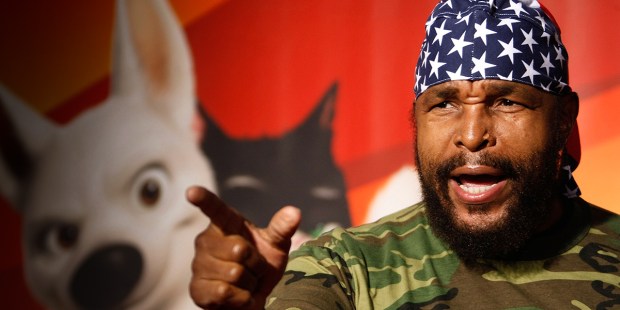 Iconic tough guy opens up about how his Christian faith sustained him in battle against cancer.

Well known for his roles in The A-Team and Rocky III, the actor known as “Mr. T” revealed in a recent interview with Fox News how his belief in God “was tested like Job.”

He explained how after being diagnosed with T-cell lymphoma cancer in 1995 his faith underwent a test like nothing else, but he persevered and is stronger for it and says, “I answer only to God.”

“I believed in God when cancer come to me. Now when I speak, I speak with authority because I’ve been there. Mr. T been to chemo, Mr. T been to radiation, hair fall out … but he’s back. Now I can give hope when I go to the hospital, see the sick kids with cancer, tell them, don’t quit … I serve God.”

Mr. T is now cancer-free and is determined to give back to the community. For example, Mr. T will be donating his entire salary from being on ABC’s Dancing with the Stars to St. Jude Children’s Research Hospital and Shriners Hospitals for Children.

Mr. T explained to Fox News that the Bible teaches us to do all things for God’s glory.

“Stay humble and be concerned for the less fortunate … I take food down to the homeless. I don’t call up the press and say, look at me! My mother told me, son, if nobody else know, God knows. I do it for his glory.”

This isn’t the first time that Mr. T has donated money to the less fortunate. In 1979 after winning a contest for the “Toughest Bouncer in America,” Mr. T donated all his winnings to his local church.

He explained to Beliefnet.com, “When I started training for the contest I called my pastor, Rev. Henry Hardy of Cosmopolitan Community Church [in Chicago]. I’ve been going there since 1977. I said, ‘Pastor Hardy, they’re having a contest, and when I win this contest I’m going to give you the money, so you can buy food and clothes for less fortunate people in the community.’ I won two years in a row—it was over $10,000. I didn’t have no car then, but I was blessed. So I gave the money freely.”

Mr. T admitted that his faith has strengthened him over the years and prays daily for strength to be a good Christian witness. He shared his daily prayer with Beliefnet.com.

Father, give me strength today, not strength so I can lift 500 pounds, but give me strength, Lord, so when I speak, my words might motivate, might inspire somebody, Lord, when they see me, let them see you. When they hear me, Lord, let them hear you. In your holy name I pray.

“I say to the Lord, ‘when they see me, let them see you’ so you know I can’t be coming out of the strip bar with a couple women on my arm. And I say ‘Lord, when they hear me let them hear you’ — that means I can’t be telling them nasty jokes I used to tell. Because the Bible says, every time Christ sees a new creature, old things are passed away. I’m not the same man I used to be, I’m not out hell-raising, stuff like that. I am a changed man. I said that God abides by me and I abide by him. I said I let God live in me. So I tell people when I step out, I’m representing the God I serve, I’m representing the mother who loved me and who used to knock on the neighbor’s door so I could have money to go to school.”

In the end, Mr. T tries to be not only a “tough guy” on the outside, but more importantly, a man of spiritual strength modeled after the greatest “strong man” who walked the earth, Jesus Christ.