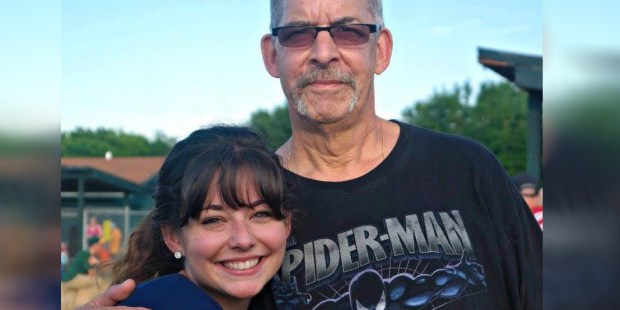 “My dad made sure my childhood was as normal as possible. I never felt life or God had screwed me over.”

Few women don’t recall the first time they took a razor to their legs, shaved away that little girl fuzz and revealed the smooth, grown lady limbs they still sport today (when they’re up for shaving, anyway). For most of us, it was a fairly daunting, messy experience we were grateful to have our moms there to guide us through. For Tiana Sheehan, however, it was a time years ago that still stands out to her as just one example of how tremendous her dad was as a single parent.
Read more: 3 Steps to being an 'abundant' single dad

While recently in the shaving supplies aisle at a grocery store, Tiana overheard a mother and daughter discussing what they’d need for the girl’s first leg shaving endeavor. “I felt that little punch in the gut that I normally feel when I see a mom and daughter doing mom and daughter things,” Tiana admitted in a Love What Matters Facebook post. Sadly, her mother passed away 14 years ago, leaving Tiana’s dad to raise her on his own.

The Kentucky dweller then endearingly turned the experience from sad to sweet, remembering the first time she’d shaved her legs with her dad’s help. “I couldn’t help but giggle,” she wrote. “I’ll never forget the look on my dad’s face when I told him I wanted to shave my legs.” She recalls him briefly putting his head down, likely over the realization that puberty was fast approaching, before taking her to the bathroom where he popped a new blade onto his razor just for her and introduced her to the shaving process.

The memory is one that Tiana cherishes as one of many in which her father courageously stepped up to take on a role that ordinarily falls to moms. “Single dads don’t get the credit they deserve,” she expressed. “My dad was so good at fulfilling both roles and making sure my childhood was as normal as possible … there was never a time I thought life or God had screwed me over. My dad handled everything: periods, shaving, broken hearts, catty girlfriends—you name it and my dad took it like a champ.”

Ultimately, Tiana’s touching tribute is a reminder that although there are many single moms raising their children without a partner by their side, the single dads deserve recognition, praise and prayers as well. It’s great fathers like Tiana’s who keep a mother’s absence from being a burden to children. “Growing up without a mom is obviously something no one ever wants, but growing up with you was the best,” Tiana wrote to her father.

She beautifully captured the invaluable impact of her dad’s presence throughout her life by telling him, “THANK YOU for never, ever, ever being too much of a man to be my mom.”