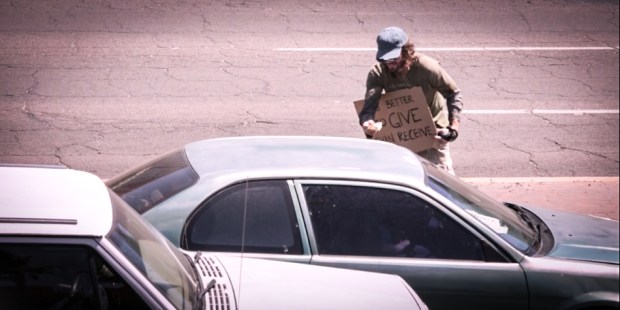 Successful businessman loses his job and gives away last paycheck.

When Tim Owen lost his upper-level job at a major media company, he had no leads and no prospects for the future.

He did have a home and a family though. This got him thinking that there were probably others out there who needed help more than he did. Such was the inspiration for his idea to give away his last paycheck, $50 at a time.

“I knew I had to do something crazy,” Owens says. “Not because of the theatrics of it, or not because of this self-fulfilling idea. It had to be a big and bold step in a way I would never forget it.”

Dressed in clothing that made him look like he’d been living on the street, he stood on the median strip of a busy road with a sign that said “It’s better to give than receive.”

Most people were surprised to be handed a $50 bill. Many refused to take it, and some asked for him to give it to someone else in need. Others were grateful for his kindness and generosity.

One man driving a work truck was obviously employed, but told Owens he really needed the money. “I just paid my bills and I came up short this week,” he said.

And who were the kindest people? The ones Owens approached because they had beat-up cars or their windows down because of lack of air conditioning.

When Owens decided to conduct this experiment in kindness and record it on film, he never intended to go public with it, according to USA Today. With encouragement from friends and family, he created the the short documentary film, Being Human, which he hopes to share with the world to encourage similar acts of kindness.

An award-winning filmmaker, Owens say his experiment and the documentary he made have given new meaning to his life.

“If I can make something that could move people to see the world through kinder eyes, then as a filmmaker, and even more so a human being, I would consider it a success.”