What’s behind the worldwide increase in attacks on religious freedom? 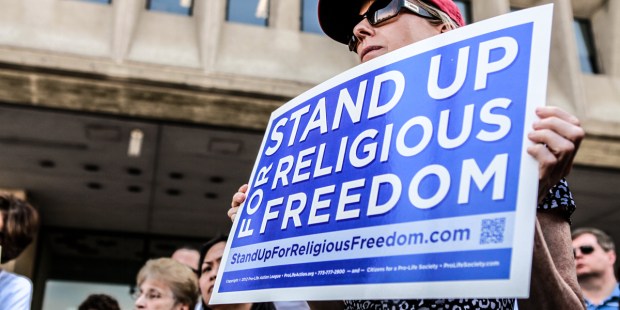 The annual Pew study on restrictions on religions shows a slight reversal of a downward trend.

The annual Pew Research Center study found that in 2015 (the most recent year for which data is available) religious freedom suffered a slight setback worldwide. For the first time in three years, government restrictions on religion have risen slightly.

More concerning, the report found, is the combined effect of government restrictions and societal actions against religious groups. Around the world, the study found, 40 percent of countries were listed on the list of the least hospitable countries to religious freedom – that’s up from 34 percent in 2014.

Among the world’s 25 most populous countries, Russia, Egypt, India, Pakistan, and Nigeria had the highest combined levels of government restrictions on religious freedom and social hostilities against the practice of religion.

Who is tightening the screws on freedom of religion?

The Pew study also reported an increase in social hostilities against religious groups in Europe. The number of countries witnessing harassment by non-governmental actors against Jews increased (from 32 countries to 33), as it did against Christians (from 17 countries to 21) and most dramatically against Muslims (from 26 to 32).

What’s behind the increasing threats against religion in Europe?

Two countries in Europe – France and Russia – were singled out by the report for each having over 200 cases of government force against religious groups. In the case of France, it was mostly due to the punishment of individuals for violating the ban on wearing the veil in public buildings. Russia, the study said, was guilty of prosecuting people, such as Jehovah’s Witnesses, for the exercise of religion.

Many of the incidents of government restrictions in Europe were in response to the continent’s refugee crisis, according to the study. Hungarian Prime Minister Viktor Orban’s 2015 statements critical of a policy that would welcome Muslim immigrants are cited as an incident of government harassment.

Slovakia’s rejection of European refugee quotas, and stated preference for Christian refugees, is also noted in the report as an example of a religious restriction.

Europe’s response to terrorist attacks (most notably the attacks in France on the Charlie Hebdo magazine offices and the Bataclan concert hall) is seen as evidence of a restriction on religious freedom. The report notes that the German police’s 2015 raid of a mosque falsely rumored to be a source of weapons for a planned terrorist attack counted as force used against a religious group.

Switzerland was among four countries in the world with the largest increase in social hostilities (the others were Niger, the Philippines and Nepal). This was due to a rise in anti-Semitic and anti-Islamic incidents, including an attack on an Orthodox Jew and the desecration of Muslim gravesites.

What’s behind the loss of religious freedom in sub-Saharan Africa?

Sub-Saharan Africa was cited as having had the largest increase in both government force and social hostilities against religious groups because of the Nigeria-based extremist group Boko Haram, according to the report.

The attacks by Boko Haram, which killed scores of people in 2015, are considered “social hostilities” by Pew, and the government’s response to them (including bans on the Islamic veil and burqa, in order to limit the risk of concealed explosives) contributed to the increase in the level of government restrictions.

What’s missing from the report?

The report readily concedes that North Korea, which it calls “the most repressive [government] in the world” is not included because its society is closed to outsiders.

It also admits to some bias. Paradoxically, a freer country may be found to have more incidents of government repression than a repressive one, as is noted in the report:

Only when it comes to religion-related violence and intimidation in society do the sources report more problems in the freer-access countries than in the limited-access ones.

When measuring countries against each other, the Pew study does not always offer the complete picture. The United States, for example was seen as having more incidents of societal hostilities against religion than were recorded by the repressive regime in Iran.

How could this be? Is it possible that Iranian society is more hospitable to other religions than American society? Not likely. In Iran the non-Muslim population has fallen dramatically since the Iranian revolution. The Jewish population in Iran dropped from 80,000 to 9,000 in that time. This could be the result of the difficulties of reporting reliable data in a repressive regime. On the other hand, perhaps if a regime is repressive enough, and has succeeded in creating an almost monolithic religious culture, religious extremists see there no reason to act against minority religions.

The Pew study’s findings provide a useful and much-needed documentation of the threat to religious freedom that continues to exist throughout the world. The uptick in government and societal repression of religion in Europe serves as reminder of the toll that terrorism takes on a free society. Confronted with a horrible year of terrorist attacks, the very liberties Europe seeks to protect are sacrificed, according to the findings in this report.