15 Contributions Christianity made to Europe … and to the world 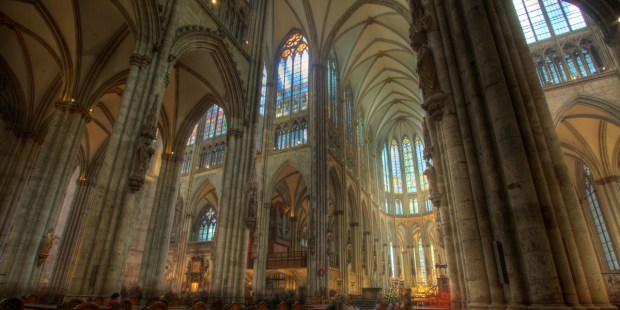 Forgiveness, the idea of “person,” and gratitude are a few of them.

Europe’s current situation is ambiguous and full of contradictions. On one hand, it has enormous potential; on the other, it shows worrying symptoms.

Which traditional elements of Christian origin continue to contribute to making Europe better and more humane? Professor and priest Antoni Matabosch, past president of the Joan Maragall Foundation, who has just been awarded the Saint George’s Cross by the Government of Catalonia, offers us 15 ideas drawn from his wisdom as an expert in ecumenism.

1. The idea of “person.” In the Judeo-Christian tradition, we discover the great news that God wants to establish a relationship of love/friendship with each man and each woman. All human beings are friends of God in the same way. All are equal and valuable. They are not God, but they are the image of God. The supreme dignity of every man/woman is an unquestionable good for democracy; it is a supreme and non-negotiable cultural good. In later Christian reflection, this human dignity was denominated “person,” and it includes four principal dimensions. A person has subjectivity and self-possession; he or she belongs to himself or herself and is self-governing (this is the unique and irreproducible value of each person). A person is also open to another “you” and to others. Being a person means being with others, in solidarity. It is, finally, openness towards God.

2. The primacy of ‘being’ over ‘having.’ If each human person and his or her personal development is not given pride of place, it is easy to fall into “commodity fetishism,” as Marx would say. Consumerism and radical productivism trap us in a cycle in which we are absorbed by what is external. Yet, excess doesn’t make us more perfect as persons; it means falling into the trap of living only for the exterior aspects of the person and the tyranny of propaganda.

3. The synthesis of logos (reason) and ágape (love). Greek tradition brought us the value of rationality, of reason, which has born fruit throughout the entire history of Europe, with special emphasis in the modern era. This is why we must be careful with today’s currents of thought that speak of “weak thought” (Vattimo), of “liquid thought or society” (Bauman) or post-truth. However, we must also reject one-dimensional rationalism. Human dignity demands that everything (even the most ingenious and intellectually acute) be permeated with love. It is not without reason that nowadays there is talk of emotional intelligence. Saint Augustine in his day already said, “You cannot enter into the truth if not through charity”: only reason rooted in what is more fundamental—love—shows itself to be the most reasonable, and therefore the most fruitful, matrix for every good culture. This balance of reason and love also helps us to understand the reasonableness of the faith.

4. History, the space in which mankind’s creative freedom acts. Historical progress finds its meaning in the hands of singular and collective human action. There is no such thing as fatalistic determinism, nor an eternal return. There is a world and a society that progressively creates culture, led by the hand of man. Nothing could be further from a tragic vision of the historical process, although due to freedom, we can move forward or backwards. Reality is the product of freedom.

5. Human rights, the value of democracy, and rule of law. The understanding of every human being as a person, with inviolable dignity, has led little by little to the affirmation of universal human rights, finally declared by the UN in 1948. Human rights offer a solid foundation for establishing and living in a democracy, founded upon the Rule of Law.

6. Openness to the transcendent. When a society closes in on itself and doesn’t open up to everything that surpasses it, it suffocates: it dries up. It requires openness to what are called the transcendentals: beauty, truth, goodness. It encompasses religion, but also opens itself up to other dimensions. This openness is the origin of great enterprises and creations.

7. Ecumenism and interreligious dialogue. Ecumenism seeks unity of Christians and of churches, in a pluriconfessional Christian Europe which, in the past, was a hotbed of religious discord. Ecumenism is based on religious freedom; on the acceptance of the values of others, where each party has a clear, unique identity, but is still open to new ideas; and, finally, it is also based on dialogue. On the other hand, Europe is becoming more and more pluralistic and more pluri-religious, and the experiences had by different religious confessions in interreligious dialogue contribute greatly towards peace and coexistence.

8. Facilitating a European version of Islam. Certain deep-seated Christian values and perspectives which have, by now, become an element of common European culture can help Muslims who have settled in Europe to practice an Islam that is not purely an imitation of the religious tradition of their countries of origin. Basic European values could guide them to a greater acceptance of all human rights, by introducing hermeneutical thought into Islam’s sacred texts, such that it becomes, more and more, a purely religious religion.

9. The unity of the human family and universal solidarity. If European tradition, based on biblical teaching, teaches us that all men and women are equal in their dignity and constitute one single humanity, we should feel solidarity towards the entire inhabited world. “The Europe we have been called to build,” says Cardinal Martini, “should be capable of offering the entire world a new contribution of wisdom: one that springs from that millenary culture which the lifeblood of Christianity has helped to mature throughout the centuries. In fact, what is asked of Europe is that it not close in on itself, but rather that it continue to be open to all forms of cooperation, above all in favor of the peoples and countries that are most in need. Also, in favor of building a civilization in which man once again reconciles himself with creation, with his neighbor, with himself.” It is not enough to create a “common European home”; we must contribute to the formation of a “family of nations.”

10. A new culture of welcoming solidarity. Christian tradition emphasizes love for others, in the works of mercy. Europe must learn to create a system and a culture of asylum and of migration. The doors should be open to immigrants and refugees. Shutting out others creates a selfish and wretched Europe.

11. The rights of peoples. Among the new generations of human rights, together with individual and economic rights, we must include the rights of peoples, which—based on their own unique culture—form a nation, even if they lack a State. John Paul II repeated this teaching many times, especially before the UN, in 1995. The European Union ought to reflect seriously on the inconveniences and injustices involved in being founded only on nation-states. The European Union should be just as interested in universal unification and in the plurality of entities of which it is composed.

12. Learning to distinguish between politics and religion, and between State and religion. The vicissitudes of history have been quite varied, but if we return to our Christian roots, Christians can contribute the idea of the fundamental importance of the separation of religions from the State, the importance of religious freedom, of the State recognizing the basic positive nature of religions, and the need for agreements or concordats in order to ensure social peace.

13. Universal structures and the principle of subsidiarity. In order to achieve and consolidate a world of solidarity in which all the peoples of the earth are respected, it is more necessary each day to create international structures: new International Law, a new worldwide economic and financial structure, courts that help overcome tensions between peoples, a universal and democratic government that surpasses current forms of sovereignty, etc. As the guiding principle of this new form of world community, it will be necessary to apply rigorously the principle of subsidiarity, according to which everything that can be done at a lower level of authority need not be done by a higher level, in order to ensure the greatest participation at all levels. It would be desirable for Europe to be a good example.

14. Create a “common European home.” The European Ecumenical Assembly of Basel stressed that Christians must help rediscover the soul of Europe, a sort of “common European home,” a model of life sustained by and based on humanism, with “house rules” upheld in a relationship of equality, shared values, dialogue, hospitality, etc.

15. Reconciling forgiveness, hospitality, and gratitude. In order to put into practice these values that are part of European tradition, we need some basic attitudes that are unequivocally Christian and profoundly human and humanizing. In order to truly overcome confrontations, wars, or terrorism, there comes a moment when only forgiveness can lead to reconciliation and a true and lasting peace. Only an attitude that welcomes every way of life and every person (whether they come from near or far) can establish a stable basis for citizens to live together in harmony. Gratitude is the capacity to recognize something as a gift that has been received, as a present, which must be carefully preserved. Europe and the world ought to put into practice a sort of mutual interchange of gifts.