Pope Francis: “Each of us is God’s love story”

At the Wednesday audience, Pope Francis focuses on Mary Magdalene, the “Apostle of the greatest hope” who shows us how intensely personal Christian faith is meant to be

VATICAN CITY — “Every person is a love story that God writes on this earth,” Pope Francis said today, as he reflected on the figure of Mary Magdalene whom he called the “apostle of the greatest hope.”

Addressing an estimated 15,000 faithful in St. Peter’s Square, during his Wednesday general audience, the pope said that Mary Magdalene shows us how intensely personal our relationship with the Lord is meant to be.

In his catechesis, he said when Mary Magdalene came to the tomb, “her eyes full of tears,” God “surprised her in the most unexpected way.” Although she first thought Jesus was the gardener, she “discovered the most overwhelming event in human history” when Jesus “called her by name: ‘Mary!’” (v.16). 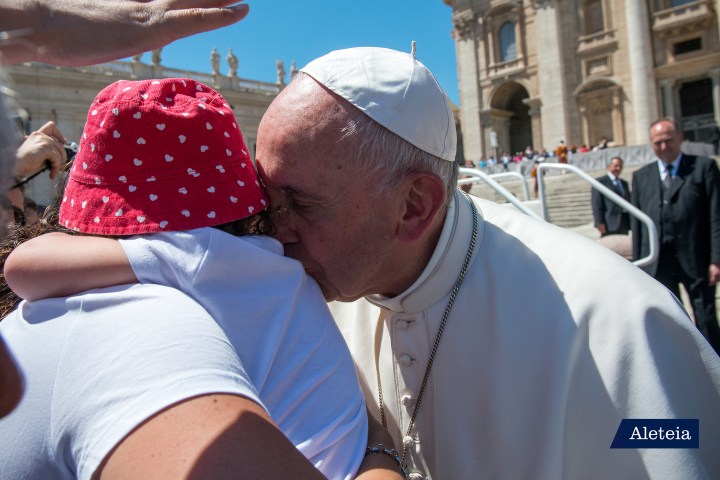 Each of us is God’s love story

“How beautiful it is to consider that the first appearance of the Risen One — according to the Gospels — happened in such a personal way! There is Someone who knows us, who sees our suffering and disappointments, who is moved by us, and who calls us by name. It is a law that we find carved into many pages of the Gospel. There are many people around Jesus who are looking for God. But the most wonderful reality is that, long before, God is the first one who cares about our lives, who wants to lift up our lives; and to do this he calls us by name, recognizing the personal face of each of us. Every man is a love story that God writes on this earth. Each of us is God’s love story. God calls each of us by name: he knows us by name, he watches us, he waits for us, he forgives us, he is patient with us.”

In calling Mary Magdalene by name, Jesus brings about the “revolution of her life,” the pope continued. “She changed because she saw the Lord,” and this revolution is “destined to transform the existence of every man and woman.”

Jesus doesn’t give joy with an “eyedropper”

The pope noted how the Gospels describe Mary’s happiness. “The Resurrection of Jesus is not a joy given with an eyedropper, but rather a cascade that overflows into all of life,” he said.

“Christian life is not woven with fluffy happiness, but with waves that overwhelm everything. Try to think, all of you, right now, with the bag of disappointments and defeats that each of us carries in our hearts, that there is a God who is near us and who calls each of us by name, and says: ‘Arise, weep no more, for I have come to free you!’ This is beautiful.”

Jesus does not “adapt to the world, tolerating death, sadness, hatred, and the moral destruction of people,” the pope continued. “Our God is not inert; rather, our God — if I may use the word— is a ‘dreamer’: He dreams of the transformation of the world, and he has accomplished it the mystery of the Resurrection.”

Jesus sent Mary Magdalene to announce his resurrection to the Apostles, the pope noted. Thus “that woman who, before meeting Jesus, was at the mercy of the Evil One (cf. Lk 8:2), now becomes the ‘apostle of the new and greatest hope.’”