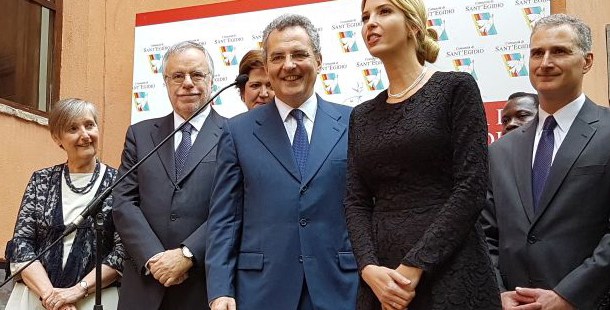 Visit included encounter with Nigerian and Ethiopian women who have been victims of human traffickers.

On May 24, after president Trump’s meeting with Pope Francis, his daughter Ivanka visited the Catholic lay Community of Sant’Egidio. Aleteia wondered what drew the ‘first daughter’ to this particular outreach organization, and turned to Zeger Polhuijs, a Rome-based seminarian and member of the Sant’ Egidio Community, for some background on the group’s work and why Ms. Trump was attracted to it.

Over the years, many different visitors have found their way to the headquarters of the Community of Sant’Egidio, which is located in the working-class Roman neighborhood of Trastevere. Guerrilla’s and governments have sent their representatives for peace talks mediated by the Community, such as the one which led to the peace of Mozambique in 1992. Diplomats and politicians have visited to talk about peace efforts, care for the poor and vulnerable, services to refugees, or the work of integration and reconciliation. Popes have visited to pray and to encourage the Community’s members in their daily service to the poor, most recently Pope Francis who payed a visit in 2014.

On Wednesday, May 24, the Community’s headquarters was visited by Ivanka Trump, daughter of U.S. president Donald Trump, after their visit to Pope Francis in the Vatican. While her father continued his meeting with officials in the Vatican, Ms. Trump met with members of the Community of Sant’Egidio to discuss efforts against human trafficking. The visit included an encounter with a number of Nigerian and Ethiopian women who have been victims of human traffickers.

Living so close to the North African coast, the Italian members of the Community have encountered refugees and migrants for many years. At the Community’s Italian language schools, they have received many survivors of the dangerous journey over sea, and have heard testimonies on the activity of human traffickers from those who have escaped from their hands. These experiences and testimonies were at the core of the encounter between Ivanka and the Community.

At the conclusion of the meeting at the Sant’Egidio headquarters, Ivanka Trump publicly thanked the Community for its efforts to save women and to fight human trafficking, and for its work for the poor and for peace. She noted the “remarkable women” that she met are “testaments to strength, faith and perseverance in the face of unspeakable adversity.”

The Sant’ Egidio Community’s broad understanding on the topic of trafficking have been informed  in great measure thanks to the many local Sant’Egidio communities throughout Africa, including the ‘BRAVO’ program, which is an effort to protect unregistered children in Africa from exploitation by organ traffickers and others. More insights come to the Community through its frequent contact with religious representatives of the Middle East’s faith communities — of the Islamic majority and of Christian minorities — especially from Syria and its war-torn cities such as Aleppo.

In response to these refugee deaths in the Mediterranean and the ongoing war in Syria, the Community of Sant’Egidio has launched the initiative of the ‘humanitarian corridors’. In an agreement with the Italian government and in cooperation with various Italian protestant churches, the Community has been allowed to accept 1000 of the most vulnerable Syrian refugees in Italy from refugee camps in Lebanon. Since that first initiative, an agreement has been signed with the Italian bishop’s conference and Caritas International for a second humanitarian corridor for refugees from Eritrea. In addition, an agreement has been signed with the French government for another humanitarian corridor for 500 Syrian and Iraqi refugees. Sant’Egidio has been promoting the model on the international level through its diplomatic contacts as a safe and humane way of receiving refugees and keeping them out of the hands of human traffickers.

Pope Francis has publicly praised the initiative, and has himself worked with the Community in his own efforts for refugees. After bringing three refugee families with him back to Rome after his visit to a refugee camp on the Greek island of Lesbos, it was the Community of Sant’Egidio he brought them to.

Before leaving the Sant’ Egidio Community, Ivanka Trump called it “a privilege” to learn about their work, and said she looked forward to supporting its efforts in the future.

In an interview (Italian), Sant’ Egidio founder Andrea Riccardi described the encounter between Ivanka Trump and the women freed from traffickers as a deeply moving moment, and said he found the “first daughter” to be an intelligent and interested person who listened well to the testimonies and stories, and showed genuine interest in both the human and the legal aspects of the issue.

Ivanka Trump left Rome with the three gifts presented to her by the Community: an olive branch as symbol for the work for peace, an autobiography of an African woman who has been relieved of the stigma of AIDS to devote herself to the care for others, and a commentary on the book of Ruth.