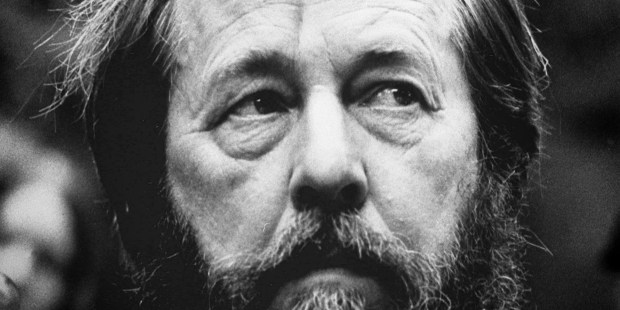 Aleksandr Solzhenitsyn’s view of patriotism brings together love, criticism, and repentance in a deeply theological view of man and nation.

Author Aleksandr Solzhenitsyn witnessed – and endured – a time of tremendous upheaval in his native Russia. Born in 1918 to a Christian family in the southern Russian town of Kislovodsk, he spent his youth under the lengthening shadow of the 1917 Bolshevik Revolution. His own odyssey brought him from simple childhood faith to Communism and then back to a mature faith forged in the crucible of loss – an experience that gave him a unique understanding of the spiritual and moral gutting that Russia had suffered.

Faith lost and rediscovered in the faces of prisoners

Raised by a widowed mother, the young Solzhenitsyn soon abandoned his childhood Orthodox faith and committed to Communism, eventually getting drafted into the Soviet army. He was an outstanding officer at first, but his allegiance began to waver as he witnessed the regime’s vicious persecution of innocents; he judged himself complicit. During a military assignment to a prison camp, he was deeply moved by the serenity and nobility of the Christian prisoners, and his neglected Orthodox faith began to stir.

After writing a few critical words about Stalin in a private letter, Solzhenitsyn soon found himself joining them.

Grueling years in prisons and hard labor camps followed. In this life of privation, his Orthodox faith grew in depth and breadth. He also managed to compose a wide array of works, from books, plays, and novels to essays, poems, letters and “miniatures” (similar to small prose poems), often writing on small scraps of paper, memorizing the texts, and then destroying the papers.

Through years of winter nights, Solzhenitsyn nourished an intuitive understanding of the suffering Russian nation. He was well aware of his country’s crimes within its own borders and abroad. And yet, he did not hate or despise his own people. Instead, he was a lover of the true Russia that was in agony under Communism’s iron grip, the Russia that needed redemption.

Solzhenitsyn’s patriotism … and ours

In a 1989 interview, Solzhenitsyn made a clear distinction between patriotism and nationalism that could apply to any country today, including the United States.

I am a patriot. I love my motherland. I want my country, which is sick, which for 70 years has been destroyed, and is on the very edge of death, I want it to come back to life. But this doesn’t make me a nationalist. I don’t want to limit anyone else. Every country has its own patriots who are concerned with its fate.

In his 1998 work Russia in Collapse, written in the midst of the turmoil and economic disorder in the years following the fall of the Berlin Wall, he writes that patriotism has sometimes been misunderstood and twisted into something self-serving and blindly nationalistic. True patriotism is something good and noble, unifying rather than divisive.

Patriotism is a foundation that does not separate but rather unifies a nation with mankind. Of course, like any human feeling, patriotism can also be skewed and distorted. Is it not similar to what has happened to the concept of freedom in today’s world … ? Freedom has been elevated to a total eclipse of a person’s obligations, to a freedom from any obligation. But we only remain human beings insofar as we constantly sense our duty – within ourselves, above ourselves.

For Solzhenitsyn, patriotism is akin to love of family. Even in diverse societies and in a nation like the United States, which is founded on a common idea rather than on a shared blood heritage, the family analogy holds firm because we are all in this together.

Love for one’s people is as natural as love for one’s family. No one can be faulted for this love, only respected. After all, no matter how much the modern world whirls and jerks about, we still aim to keep intact our family, and we hold it in special regard, suffused with sympathy. A nation is a family too, except an order of magnitude higher in numbers. It is bound by unique internal ties: a common language, a common cultural tradition, a shared historical memory, and a shared set of problems to resolve in the future. Why, then, should the self-preservation of a people be held a sin?

But patriotism is neither passive nor blind to the ugly realities of the loved nation-family. It is clear-eyed and truthful, and it rolls up its sleeves to heal, restore, and help carry the burdens and shared blame that come from living in a semi-dysfunctional community.

Patriotism is an integral and persistent feeling of love for one’s homeland, with a willingness to make sacrifices for her, to share her troubles, but not to serve her unquestioningly, not to support her unjust claims, rather, to frankly assess her faults, her transgressions, and to repent for these.

We are a flawed nation; all nations carry their burden of guilt because nations are composed of imperfect people who make decisions marred by selfishness and ignorance. So there is no exporting of responsibility. We are responsible as individuals and as nations. (In spite of all that he suffered in the labor camps and prisons, Solzhenitsyn never held himself apart from his people as if he were innocent and sinless. He felt a shared responsibility for Russia’s fate.) Solzhenitsyn goes on to say that spiritual renewal is not a top-down mandate but an inside-out decision that we must make as individuals. No one is going to do it for us. It’s up to us.

If only each of us could sense it: I am not some lone fragment; I can influence what goes on – sometimes through fearless acts, sometimes through endurance. Who else will do it if not we? … We will never receive anything from powerful benefactors until we ourselves come to believe that we are the makers of our fate.

Could Solzhenitsyn’s style of patriotism be relevant for the United States today? Many would argue that we in need of a spiritual renewal based on frank acknowledgement of our own misdeeds – not principally on the abstract level of policies, but more fundamentally on the level of a personal, spiritual reckoning.

A final word from our Russian prophet, this time from The Gulag Archipelago, points to the real battlefield for the moral soul of a nation.

Gradually it was disclosed to me that the line separating good and evil passes not through states, nor between classes, nor between political parties either — but right through every human heart — and through all human hearts. This line shifts. Inside us, it oscillates with the years. And even within hearts overwhelmed by evil, one small bridgehead of good is retained. And even in the best of all hearts, there remains … an un-uprooted small corner of evil.

What if the main enemy were not so much the Others (whoever they may be this time around) but rather the evil that lives inside of us? And what if the struggle to renew our own nation were not a matter of policies or laws or walls or even cultural initiatives, but something much more intimate, a choice for good over evil in those personal battlefields of our own hearts? What if those private, personal sins – the ones no one else sees, the ones we thought didn’t matter or affect anyone else – have much more to do with the darkness in our country than we previously thought?

Solzhenitsyn’s words suggest that the ultimate horizon of patriotism is moral, because what’s personal really is political – just not in the way we usually expect.

An interview with Alexandr Solzhenitsyn is available here for curious readers. Joseph Pearce’s biography Solzhenitsyn: A Soul in Exile is also an excellent place to begin delving deeper into his life story.