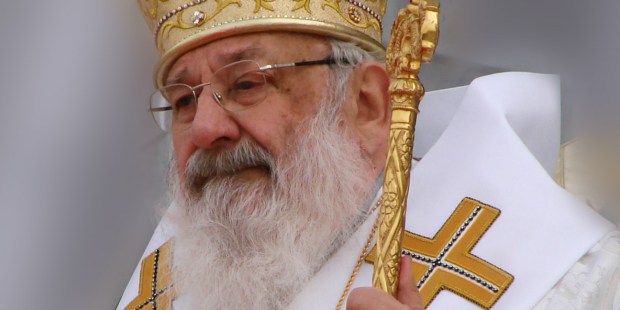 Prelate spent much of his priesthood in the United States

Cardinal Lubomyr Husar, retired major archbishop of the Ukrainian Greek Catholic Church, has died at the age of 84. Cardinal Husar, who headed the Ukrainian Catholic Church for 10 years, died May 31 after a serious illness, the Religious Information Service of Ukraine said on its website.

Pope Francis sent a telegram to Cardinal Husar’s successor, Archbishop Sviatoslav Shevchuk, lauding Cardinal Husar as a zealous pastor. The pope recalled the cardinal’s “tenacious faithfulness to Christ, despite the hardships and persecutions against the Church, as well as his fruitful apostolic activity to promote the organization of Greek Catholic faithful, descendants of families forced to leave western Ukraine, and his efforts to find new ways for dialogue and collaboration with the Orthodox churches.”

An emotional Archbishop Shevchuk said in an impromptu press conference that the cardinal “was the spiritual father of the Ukrainian people, and today, in one moment, we became orphans.”

Responding to a question about a possible cause for canonization of the cardinal, Archbishop Shevchuk said that everyone who met him saw the beauty of his holiness.

Born in Lviv, Ukraine, on Feb. 26, 1933, Lubomyr Husar fled from Ukraine with his parents in 1944, ahead of the advancing Soviet army. He spent the early post-World War II years among Ukrainian refugees in a displaced persons camp near Salzburg, Austria. In 1949, he emigrated with his family to the United States.

From 1950 to 1954, he studied at St. Basil’s College (Ukrainian) Seminary in Stamford, Conn. He continued his studies at Catholic University of America in Washington, DC, and at Fordham University in New York. He was ordained a priest of the Eparchy of Stamford, Conn., on March 30, 1958.

From 1958 to 1969 Father Husar taught at St. Basil’s College Seminary, and also between 1966 and 1969 was the pastor of Holy Trinity Ukrainian Greek Catholic parish in Kerhonkson, N.Y. In 1969, Father Husar went to Rome, where he earned a doctorate in dogmatic theology at the Pontifical Urbanian University in 1972. During his stay in Rome he joined the Ukrainian Studite monastic community at the Studion Monastery not far from Castelgandolfo and was elected hegumen (superior) of the monastery in 1974.

He was consecrated a bishop in 1977 in the Studion monastery chapel in Castelgandolfo by Cardinal Josyf Slipyj, who was major archbishop of the Ukrainian Catholic Church from 1944 to 1984. He was named Archimandrite (Abbot) of the  Studite Monks in Europe and North America in 1978.

When the Soviet Union collapsed in 1991, he returned to Ukraine and served as spiritual director of the newly reestablished Holy Spirit Seminary in Lviv. In 1994, he established a new Studite monastery near Ternopil, Ukraine.

The Synod of Ukrainian Greek Catholic Bishops elected him Exarch of the Archiepiscopal Exarchy of Kyiv-Vyshhorod in 1995. In 1996, the Synod elected him as auxiliary bishop with special administrative delegated authority to Myroslav Ivan Cardinal Lubachivsky, Major Archbishop of Lviv. Upon the death of Cardinal Lubachivsky on December 14, 2000, Pope John Paul II named Bishop Husar apostolic administrator of the Ukrainian Greek Catholic Archeparchy of Lviv.

In January of 2001, the Synod elected him Major Archbishop of the Church and Father and Head of the Ukrainian Greek Catholic Church, the largest of the 22 Eastern churches in communion with Rome. The following month, he was named a cardinal by Pope John Paul II.

In 2001, Cardinal Husar along with the Catholic bishops, clergy and faithful of Ukraine welcomed Pope John Paul II on his first visit to a former Soviet Republic. The cardinal also became the first chancellor of the newly established Ukrainian Greek Catholic University in Lviv, Ukraine. Under his leadership in August 21, 2005, the major archiepiscopal see of Kyiv-Halych was officially transferred to Kyiv, the capital city of Ukraine.

On Feb. 10, 2011, Pope Benedict XVI announced that he has accepted Cardinal Husar’s resignation. The cardinal remained active in the ecclesial and social life of Ukraine, though he was limited by problems with his eyesight. Eventually, he became totally blind. In spite of his limitations, Crux, in a 2014 article, called Husar “still a critical voice of conscience in Ukrainian life.” Referring to the popular revolt against the government of Russian-allied Ukrainian President Viktor Yanukovych, Crux noted:

His presence in Kiev’s Maidan Square last November was seen as a blessing to those rallying for a more transparent, responsible form of government despite frigid winter temperatures.

“We’re convinced that the churches have to play a very important role in the development of the society,” Husar said during a meeting with journalists Monday in Kiev.

“The Church should not remain only a praying society,” he said. “We have to encourage people to pray and, at the same time, teach them to be practical Christians.”

“We don’t wish to take part of machinations that build the state, but we do wish to inspire those in politics, so that, practicing their Christian lives, they build up a better nation,” said Husar, who believes that religious leaders still play a key role in overcoming five decades of Bolshevik oppression.