The end of our tour of the Madonnelle brings us to the most beloved of all the images.

We come now to the end of our month-long daily tour through a particular artistic expression of Marian devotion: Rome’s “Madonnelle” (“little Madonnas”). These are images of Mary—some of them miraculous—scattered throughout the streets and alleyways of the city. They are the object of much popular devotion. The entire series can be viewed here: Little Madonnas of Rome

If there is a truly “Roman” Madonna, it is surely the “Madonna of Divine Love.” This miraculous icon is kept at a shrine 14 kilometers (about nine miles) from the city of Rome, in Castel di Leva, where the first miracle took place. In 1740, a pilgrim heading towards Saint Peter’s Basilica got lost in the countryside, and was attacked by a pack of wild dogs. Raising his eyes to the ruins of an old tower, he saw an icon of the Virgin and Child; he prayed to her, and the beasts immediately left him alone. Word reached the city, and from that day on, there have been ceaseless pilgrimages. A second miracle was recorded in the 1930s, when a young priest, named Umberto Terenzi, the first rector of the shrine, survived a car accident very near the shrine.

However, this devotion especially regained popularity after World War II, because the grace of the liberation of Rome from the Germans is attributed to the Madonna of Divine Love. After the bombardments of 1943 devastated the area of the Shrine, the image of the Virgin was moved: first, to the church of Saint Lawrence in Lucina (outside of which, today, you can find a shrine dedicated to her), and then to the church of Saint Ignatius of Loyola. When the final battle was imminent, Pius XII invited the people of Rome to pray to the Madonna for the city’s salvation.

On June 4, 1944, the people—joined by Pius XII—made a vow to Mary of Divine Love, asking her to protect the city. That same day, the Allies entered Rome without a fight, following the retreat of the Germans. In thanksgiving for the city having escaped this danger, a shrine was built at Castel di Leva. Also, many small shrines dedicated to the Madonna of Divine Love arose throughout the city, and even today continue to be an object of devotion. The first of these shrines is located in a small chapel on the wall of the Castro Pretorio.

Many of these, in addition to the title of “Madonna of Divine Love,” are accompanied by a plaque remembering the dangers escaped during the war. Other shrines were built in 1954, on the occasion of the Marian Year.  The Shrine of Divine Love is a beloved pilgrimage destination for the residents of Rome. Every Saturday, from the first Saturday after Easter to the last Saturday in October, there is a nocturnal pilgrimage—on foot—which leaves the Circus Maximus at midnight, and reaches the shrine at dawn, when Mass is celebrated for the pilgrims. 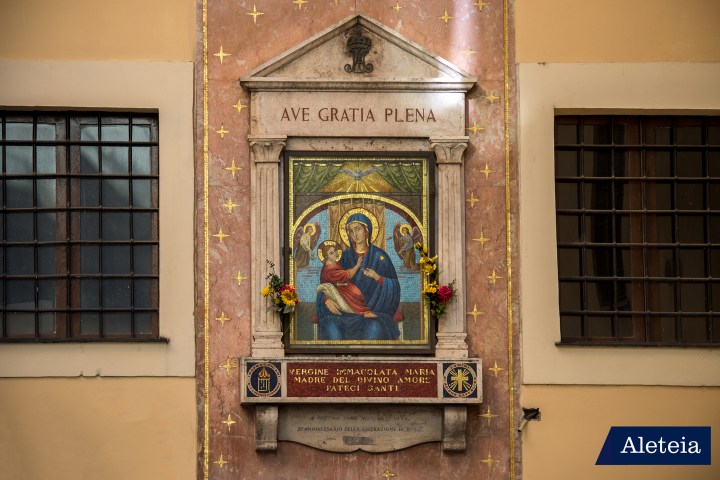 Find the 31 installments of the series here: Little Madonnas of Rome