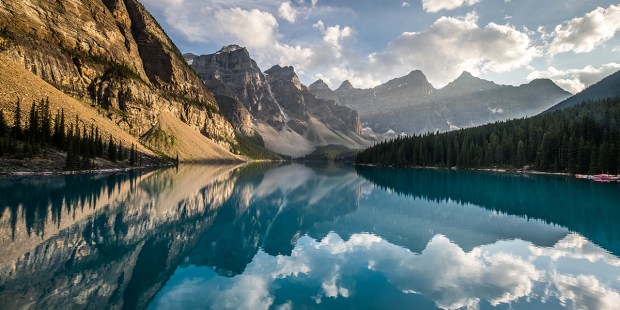 My little son is going to grow up in this world, and that means I better take care of it.

Right around two years ago, Pope Francis released his first encyclical letter, Laudato Si’, and as I recall from the ensuing Facebook memes, it rocked everybody’s world. I had a particular reason to be interested in it. My first son had just been born, and suddenly the topic of the care of our Earth, the world which my son would be growing up in, seemed exponentially more important.

The encyclical ended up being a real gift to me. It has been my guiding star, especially about certain ideas I want my son to learn about his place in the world. Here are some of the points that really stood out to me:

The natural world will show you the face of God: In mankind’s effort to leave behind the pantheism of the pagan world, we tend to go to the other extreme. We think of God as existing beyond the world, when in fact, He is to be found right here in the heart of the world. We don’t worship the Earth anymore, but we shouldn’t forget that nature is still sacred, because, as Pope Francis writes “The universe unfolds in God, who fills it completely. Hence, there is a mystical meaning to be found in a leaf, in a mountain trail, in a dewdrop, in a poor person’s face.” (233) There’s a reason that Jesus used so many metaphors from nature for his parables. God uses nature to show himself to us. I want to teach my son that a sunrise is beautiful because God is beautiful.

We are stewards of the natural world, not masters of it: Pope Francis writes, “We must forcefully reject the notion that our being created in God’s image and given dominion over the earth justifies absolute domination over other creatures. The biblical texts … tell us to ’till and keep’ the garden of the world.” (67) Yes, the world was created to be our home, and yes, even one human life is more valuable than the whole created universe. But though we are greater than the rest of creation, we still have a true responsibility toward our common home. We didn’t create the world, so we do not have absolute rights over it. I want my son to know not just what nature can do for him, but also, how to take care of it.

On that note, we have to remember that the created world is valuable in itself, not valuable because of its usefulness to us. Pope Francis reminds us that “It is not enough … to think of different species merely as potential ‘resources’ to be exploited, while overlooking the fact that they have value in themselves.” (33) The creatures of the world “give glory to God by their very existence.” It’s a little thing, but this is why I teach my toddler not to kill ants for fun. Tiny as their lives are, they belong to God, and He delights in them, so we only kill bugs if we need to, or if they scare us.

The way you treat creation has real effect on your soul: “We have only one heart,” Pope Francis says, “and the same wretchedness which leads us to mistreat an animal will not be long in showing itself in our relationships with other people. Every act of cruelty towards any creature is contrary to human dignity.” (92) I try to buy free-range eggs, and whenever I can afford it, ethically raised meat, too. I don’t just do this out concern for the animals, but also, as a way of withdrawing support from the massive factory-farms. It’s not just for the animal’s sake–a person who engages in habitually cruel and unnecessary treatment of animals is acting contrary to his own human dignity, and I don’t like to support it.

The changes I’ve made in my life, spurred on by Laudato Si’, have been fairly small, but Pope Francis has been there to remind me that small changes still count: “Saint Therese of Lisieux invites us to practice the little way of love, not to miss out on a kind word, a smile or any small gesture which sows peace and friendship. An integral ecology is also made up of simple daily gestures which break with the logic of violence, exploitation and selfishness.” (230)

On the anniversary of this great encyclical, let’s all try to remember that every little act of love counts, whether that love is directed towards God, our fellow man, or the Earth itself.