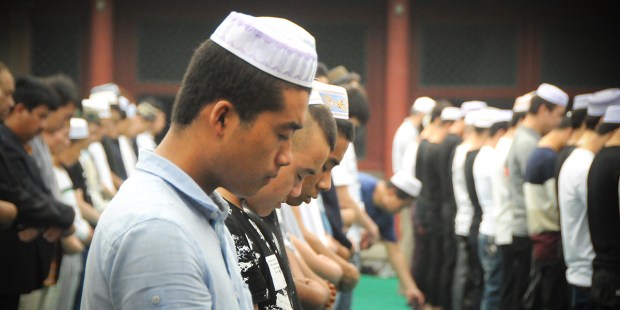 Authorities have reportedly demanded that members of ethnic minority turn over any Islam-related items from their homes.

Muslims in China say they have been threatened with punishment if they don’t hand over their Qurans, prayer mats, shawls, or any other items associated with Islam, according to a report in today’s Independent.

Dilxat Raxit, the leader of the exiled World Uyghur Congress, said that Chinese officials in Xinjiang province have warned members of the Uyghur ethnic minority that they will face “harsh punishments” if they do not obey the directive.

“We received a notification saying that every single ethnic Uyghur must hand in any Islam-related items from their own home, including Qurans, prayers and anything else bearing the symbols of religion,” Raxit told Radio Free Asia (RFA).

“The announcements say that people must hand in any prayer mats of their own accord to the authorities, as well as any religious reading matter, including anything with the Islamic moon and star symbol on it,” he said.

Chinese Foreign Ministry spokesman Lu Kang responded to inquiries on Friday by saying that reports that Muslims have been forced to hand over their Qurans are false, reported NDTV.com.

“We hope relevant parties refrain from making groundless allegations and rumors,” he said.

Amnesty International, in its 2016-17 report, accused the Chinese government of violating the freedom of religion of the Uyghur ethnic minority.

In April the Chinese government announced that it had prohibited parents in the western region of Xinjiang, where 10 million Uyghurs live, from giving their children Islamic names such “Muhammad,” “Arafat” or “Jihad,” according to a New York Times report.

Tensions between the ethnic Uyghurs and the Chinese authorities heated up in 2009, when ethnic rioting left 200 dead, the majority of whom were Han, the dominant ethnic group in China. The government responded to the riots with a crackdown on security in the region.