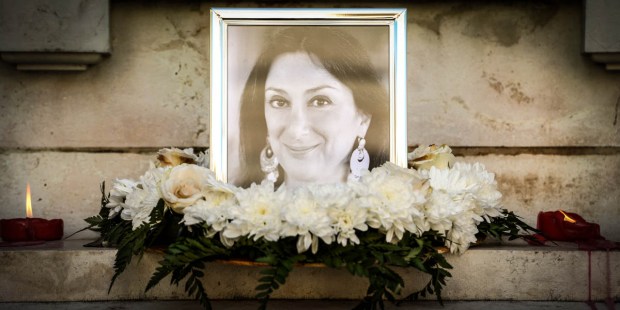 Matthew Mirabelli | AFP
Flowers and tributes lay at the foot of the Great Siege monument in Valletta, Malta, on October 19, 2017 which has been turned into a temporary shrine for Maltese journalist and blogger Daphne Caruana Galizia (picture) who was killed by a car bomb outside her home in Bidnjia, Malta, on October 16, 2017. / AFP PHOTO / Matthew Mirabelli
Share
Print
Aleteia - published on 10/20/17

Pope Francis is assuring prayers for the soul of a Maltese journalist who was killed Monday by what investigators believe was a remotely-controlled bomb under her car.

Daphne Caruana Galizia was investigating corruption among leading politicians in the tiny Mediterranean island nation, and was a critic of Prime Minister Joseph Muscat.

“Saddened by the tragic death of Daphne Caruana Galizia, His Holiness Pope Francis offers prayers for her eternal rest, and asks you kindly to convey his condolences to her family,” the pope’s secretary of state, Cardinal Pietro Parolin, wrote in a telegram sent to Archbishop Charles Scicluna of Malta. “The Holy Father also assures you of his spiritual closeness to the Maltese people at this difficult moment, and implores God’s blessings upon the nation.”

Caruana Galizia was a well-known blogger and fierce critic of the government and the opposition.

The assassination of the 53-year-old journalist has shocked the nation and her three sons have called for the resignation of Prime Minister Joseph Muscat. Caruana Galizia accused Muscat of connections by his wife and members of his government to shell corporations in Panama, allegations which the Muscats have denied.

The European Union, of which Malta is a member, as well a group of U.N. human rights experts have demanded a prompt, independent investigation into the murder.