St. Mary of Egypt: From a life of sin to sainthood 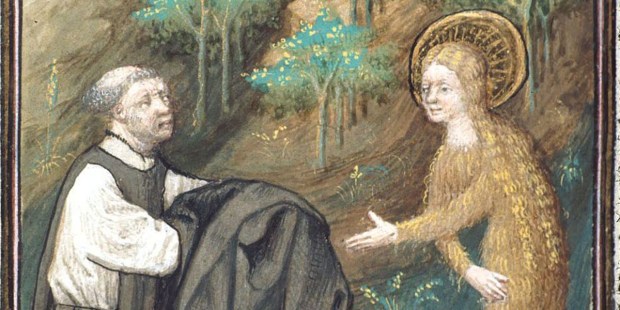 She attempted to follow the other people into the church but something strange and inexplicable happened.

In his “Essay on Man,” Alexander Pope penned three words that became immortalized: “Hope springs eternal.” Nowhere do these words fit better than in the Catholic Church. For the Church of Christ is the home of forgiveness, mercy, and, of course, redemption. Meet Mary of Egypt.

Mary was born somewhere in Egypt in 344, and, for unknown reasons, left home at the age of 12, settling in Alexandria. She quickly became adept at using her body to get what she wanted, though she never accepted money for her “services.”

Mary lived this way for 17 years. One day she saw a large group of people and discovered that they were headed to Jerusalem on a pilgrimage for the Feast of the Exaltation of the Holy Cross. She decided to join the pilgrims, with every intention of using her skills as a seducer during the pilgrimage; in fact, she started by seducing her way on to the boat for the journey.

On the actual feast day, she joined the crowd as it processed to the church to honor the relic of the True Cross. She attempted to follow the other people into the church but something strange and inexplicable happened. She could not enter. Something was holding her back. No matter how hard she tried she could not get past the entrance.  Mary walked to the side of the church, fell down on her knees and began to cry.

Mary looked to her side and saw a statue of the Blessed Virgin. As she looked at it the realization of her sinful life impacted her. Remorse overwhelmed her. She prayed to the Blessed Virgin to help her, pleading for forgiveness. When she tried to walk into the church again, she entered without a problem. She kissed the relic of the True Cross and begged the Virgin Mary to not forsake her.

As she left the church a stranger stopped her saying, “Please, take these,” and handed Mary three coins. Mary purchased three loaves of bread and headed for the desert. She did this because the Virgin Mary had told her that was where she would find peace. Along the way, she stopped at a church alongside the Jordan River.

The church was actually the Monastery of St. John the Baptist. It was here she was baptized into the faith and received the sacraments of Penance and Holy Eucharist. She then moved into the desert and was not seen by anyone for 47 years. This is when a priest by the name of Father Zosimas came into her life.

Father Zosimas was out in the desert because it was the custom for him and his brethren to spend the 40 days of Lent fasting and praying, returning home on Palm Sunday. He was stunned when he came across this dirty, unkempt, raggedy woman. Her hair was pure white, the years in the desert having taken their toll on her emaciated body. She begged him to give her a cloak to cover herself. Father Zosimas did as she asked and the woman hurriedly tired to garner some dignity.

The priest asked her if she would tell him why she was in the desert and share what had happened to her. Slowly but surely, Mary began to open up and before long had told Father about her life as a “prostitute” and how hard life had been for her, alone in the desert. Father Zosimas cried. He realized that the woman, who told him her name was Mary, had achieved a level of holiness all the greater after her previous sinful life.

Mary asked Father Zosimas if he would return the following Holy Thursday with Communion for her. He agreed and, one year later, came to meet her again. She asked him once more to come again the following year. He agreed.

A year later, when Zosimus returned again, he found Mary’s body. Next to it was a note stating that she had died in 421, on the same night she had received Holy Communion. Father buried her incorrupt body where he had found it. That was her wish. Upon returning to the monastery he shared his story with his brethren who preserved it through oral tradition until St. Sophronius wrote it down.

St. Mary of Egypt is honored in the Roman Catholic Church (April 1) and by the Orthodox. She is the patroness of chastity, temptations of the flesh, and skin diseases.

St. Mary of Egypt, pray for us all especially today as sins of the flesh are so prevalent.

Read more:
St. Mary of Edessa: A saint for those who have loved Jesus but have fallen away