Talking with other Catholics as if you actually loved them 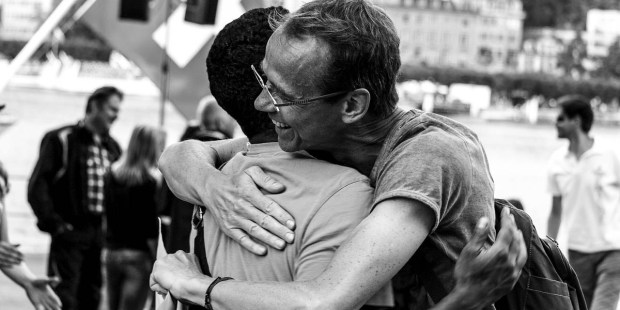 Wherever two or three are gathered together, someone will miss the point.

A few weeks ago a writer I know posted a note on Facebook declaring that whenever a reader says he doesn’t understand something, it’s his (the writer’s) fault. He has failed to write clearly. I kind of admire the humility. I wish more writers I edit thought this, because then they wouldn’t argue so much.

But really, it just isn’t true about writers like him, even as a generalization. And of those of whom it is true, it leaves out half the problem. That half of the problem says a lot about the way we talk to and about each other.

The writer and the reader

But here’s the thing: Often the reader (or the person in the pews) who says he doesn’t understand:

a) hasn’t read the article at all (or listened to the homily);

b) read it really fast or while distracted;

d) is using what you said as an excuse to air his pet opinions and peeves, and ride his hobbyhorses;

e) reads it through his own assumptions;

f) read it through his own assumption about what you, being whatever he thinks you are, must have meant;

g) loves being contrary no matter what;

h) exaggerates your claim beyond plausibility to make it look wrong or silly;

i) try to deflect a claim they don’t want to accept by pretending it wasn’t clear;

j) just can’t follow an argument more than two steps long or go deeper than one level into the subject;

k) doesn’t want to follow such an argument and would rather blame you than admit to laziness;

l) wants to prove his superiority or make others think badly of you.

I’ve probably missed some other reasons. I’ve suffered all of these and committed at least “d” and probably “f.” My wife would add “g,” especially after this morning’s argument over keeping the old flower-boxes she wants to throw out just because the wood’s a little rotten. What she calls contrarian, I call thrifty.

Even those who don’t write or preach will have suffered this kind of thing on Facebook or in conversations over the dinner table or in committee meetings at church. Wherever two or three are gathered together, someone will miss the point. You try your best to say something serious and people knock down something you didn’t say. They usually do it sincerely and often in a way that’s almost impossible to disentangle. If you challenge them, they usually double-down.

Scripture offers a whole string of examples of people not listening in some of the ways I listed. The Bible’s second big story tells of the serpent challenging Eve’s memory of what God had said and then trying to undermine his authority to say it (basically, “c” and “f” above). The Sadducees and Pharisees notoriously played verbal games with Jesus (“l”). St. Paul is clearly vexed at how many in the churches he founded blew off what he said, or rationalized it away (“c” and “i”).

I write about this not just for the pleasures of indirectly venting about annoying readers. We all talk a lot and almost all of us do this to each other. Between us and the people to whom we should listen sits a fallen ego, the works like a defective translation program that often gets the translation wrong.

I see that clearly in others because I do what I do. But less clearly in myself, if my wife and friends are to be believed. (Feel free to tell me they’re wrong.) That’s the human default position, I suspect.

The saintly person might be defined as the person who actually listens to others and hears exactly what they say. The holy person loves them and has (with God’s help) conquered the ego that gives the wrong translation.

Don’t be the reader I described. Here are a few rules I can’t claim to follow very well myself, but I think they help:

If the subject is contentious or the person really annoys you, as some people do, either because your personalities clash or because they’re genuinely annoying people, say an Our Father or Hail Mary for him before you write anything in response. Ask the Father to help you work for the other person’s good, remembering he’s an equally beloved child of the Father.

If we all did this better, the world might hear our talk and say “See how those Christians love one another.”