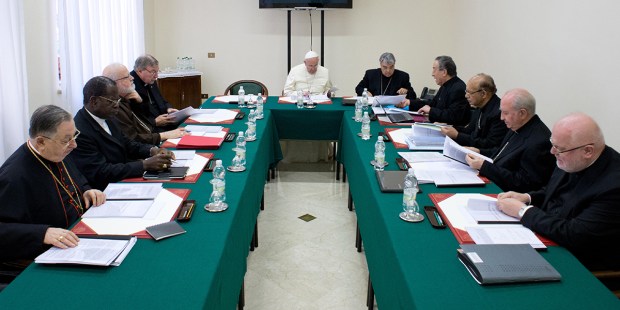 During its 23rd session now underway, the pope’s Council of Cardinal advisors, known as the C9 because there are nine cardinals on the panel, is examining a proposal to establish decentralized courts to investigate cases of clergy abuse of minors, reported Vatican Insider on February 27. The aim would be to speed up the consideration of complaints.

According to the Italian Vaticanist website, the C9—which is meeting through tomorrow at the Vatican—has on its agenda a proposal on this subject from Cardinal Sean O’Malley, archbishop of Boston, member of the Council as well as president of the Vatican Commission for the Protection of Minors.

Since John Paul II’s papacy, cases of sexual abuse are seen directly by the Congregation for the Doctrine of the Faith, and therefore at the Vatican level, rather than in dioceses. According to this new proposal, the “technical” treatment would be decentralized, while remaining under the responsibility of the dicastery.

There are currently 1,800 pending cases of abuse of minors (children or adolescents). The Congregation for the Doctrine of the Faith is consequently “overworked,” says Vatican Insider. Not only are there many cases; they are complex to deal with, needing to take into account the legislation of each country. The idea would be to create regional courts to speed up the handling of complaints.

Third Section of the Secretariat of State

According to the site, the nine cardinals and the pope also heard Bishop Jan Pawlowski, head of the third section of the Secretariat of State. The section was recently created for the management of the Holy See’s diplomatic staff. Vatican Insider says that the cardinals’ discussions also concern the care given to other curial staff, priests and laity, with hypothesizing the creation of a “moderator of the Curia.”

Concerning the reform of weighty dicasteries like the Congregation for the Evangelization of Peoples, there is also the question of the geographical competence of such an organization. Formerly dedicated to Africa and Asia, as these were mission territories, with their own budget and own administrations, journalist Andrea Tornielli questions whether such a dicastery still has meaning when Europe itself has become mission territory and Africa and Asia in fact send many priests as missionaries to the West.