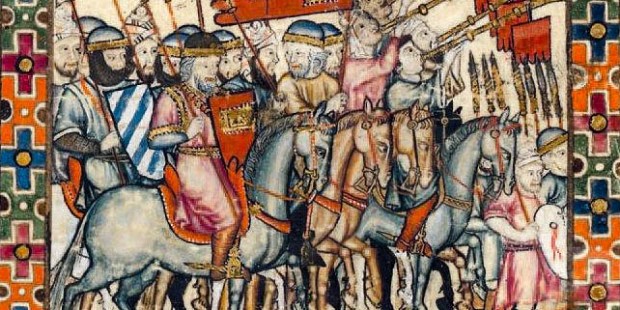 The blood on the corporals has been scientifically analyzed and shown to be of human origin.

Daroca, a picturesque city in Aragon in Spain, was the site of an important Eucharistic miracle called the Miracle of the Corporals.

Starting in the 8th century, Muslims (known then as Moors) conquered and maintained control over nearly the entire Iberian peninsula. Eventually, after centuries of resistance and fighting that failed to regain substantial ground, Christian armies rallied to reconquer the lost territory.

On February 23, 1239, Christian troops from Daroca, Teruel, and Calatayud (in eastern Spain) prepared on Mount Codol to to retake the castle of Chío (under Muslim control), south of Valencia.

Moments before the battle, the chaplain from Daroca was celebrating Mass, during which he consecrated six hosts to be received at Communion by the six captains of the troops. However, a surprise attack by the enemy forced him to cut the Mass short. The chaplain escaped, running away with the consecrated hosts wrapped in corporals, which he then hid on the mountain.

When the Christian forces had won the skirmish and the immediate danger was past, the commanders wanted to thank the Lord, and asked the priest to give them Communion. When the chaplain went to find the Blessed Sacrament where he had hidden it, he discovered that the six hosts were saturated with blood and were stuck to the corporals.

Upon seeing the miracle, the commanders took it as a sign from Jesus that they would be the victors in this battle. They had the priest lead the charge, raising up as their standard the corporals with the bloodied hosts. The Moors were thoroughly defeated.

Read more:
Need cash for a good cause? Turn to Our Lady of Good Remedy

According to the legend, during the mule’s journey from Luchente to Daroca a series of prodigious events happened: when the animal passed by the town of Játiva, a choir of heavenly voices was heard. As it passed near Alcira, a woman possessed by the devil was freed from his power, and when the mule with the hosts passed Jérica, two thieves, who were at the point of killing a merchant, repented and returned to him all the goods they had stolen.

This miracle is well known in much of the world, and the blood on the corporals has been scientifically analyzed and proven to be of human origin.

Read more:
From Fatima to the Eucharist: The science of miracles

A church was built in Daroca especially to house the Holy Corporals: the Church of St. Mary Colegiata, where the city celebrates its Eucharistic feast day with extraordinary solemnity. The Holy Corporals are carried around the city walls and shown to the pilgrims who gather with devotion to remember this prodigious Eucharistic miracle.