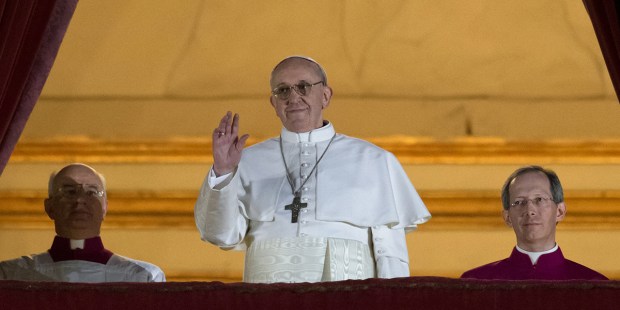 The pope’s No. 2 reflects on the anniversary of Jorge Bergoglio’s election

Vatican News reported his reflections today, the anniversary of the election of Jorge Bergoglio’s election to the See of Peter.

The three words are joy, mercy and evangelization.

Cardinal Parolin said, “It struck me that all the [pope’s] documents or at least the most important ones – I speak of Evangelii gaudium, which was something of a programmatic document for his Pontificate, but then Amoris laetitia and also, perhaps indirectly, Laudato si’ –they always recall joy … the praise that is born of joy from a soul full of joy.”

Cardinal Parolin called joy the “fundamental characteristic” of the pontificate, “a joy that does not arise evidently from carelessness, but from the fact of knowing that one is loved by the Lord.”

Cardinal Parolin continued to say that the other feature of the pontificate is mercy, as indicated, of course, by the pope calling a Year of Mercy.

“Mercy, that is, a personal and total love that God has for each of his creatures and on the other side, the joy of communicating this good news of the Gospel to others; the fact of announcing, bringing to others the announcement of the salvation of Jesus becomes a source of joy for those who receive it, but also for those who proclaim it. It is a shared joy.”

Read more:
Pope Francis: Our false ideas about God prevent us from experiencing his mercy

Finally, Cardinal Parolin suggested that the third characteristic of these five years with Pope Francis is evangelization: “that of the outward looking Church that must bring the Gospel to all of creation.”

Read more:
Pope Francis: God Searches for Us “Until The End”