The most influential woman at the Vatican is retiring 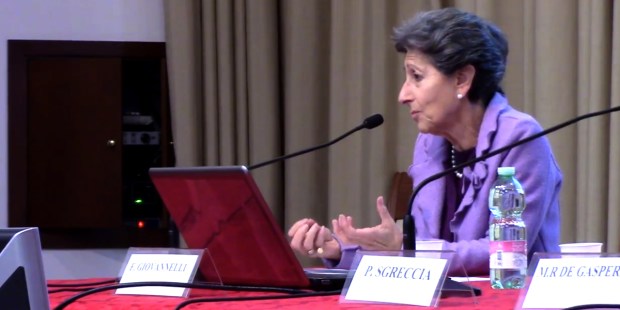 In a few weeks, she will leave her position, because of reaching the age of retirement. Delicate and smiling, she is willing to take a few moments during this exciting time to share with Aleteia some topics of importance to her.

“I had a peaceful childhood. Dad was an international official who worked for the Italian Ministry of Industry, which helped build Europe. Then in ’59, the Common Market opened, and we moved to Brussels,” she tells us.

“I had a very happy childhood and adolescence, with wonderful parents who gave me balance,” she acknowledges. “Their life wasn’t an easy one; all you need to think of is that they married on April 14, 1940, and my father went off to war on June 2 of the same year and returned in 1946. And all of this wasn’t easy, but I received a testimony of fidelity on the part of both. I lost my father when I was 19 years old, and then I lived with my mother until she died in 1999.”

In the service of five pontiffs

Starting in 1974 after graduating with a bachelor’s degree in political science, Flaminia began to work for the Holy See at the Pontifical Council for Justice and Peace.

Unlike her colleagues at the office, she wasn’t part of a religious community or movement. She was just a young woman from the parish, working for the pope.

“This threw me into a crisis,” she admits. “But the ecretary at the time, Fr. Roger Joseph Heckel, told me, ‘This is where your commitment lies.’ And these words helped me a great deal.”

In this way, she discovered that her Christian commitment was precisely her work at the Vatican. She understood then that she couldn’t be just a functionary. On the contrary, her service to the pope became a form of service to the fundamental rights of man, thanks to the contribution of Christian social doctrine.

In fact, during these years, her profound knowledge of ethical, work-related, economic, and financial issues was decisive in the contribution offered by the Holy See regarding questions of integral development at international institutions, in particular at the United Nations and the European Union.

In order to explain the importance of Christian social doctrine, Flaminia borrows “a phrase that Pope Francis dealt with in Evangelii Gaudium, when he says that ‘time is superior to space.'”

“The pope says that the ‘long term’ wins compared with short-term spending, over occupying positions of power in the immediate short term. The reality of eternity — the idea that everything doesn’t end here — confers responsibility on us.”

But for Flaminia’s heart, beyond her commitment at the Vatican, there was a desire to do more, especially for the most vulnerable. And that is how, accepting the request of a priest from Mozambique, she launched the project O Viveiro (The Nursery), “to restore dignity and offer education to African children.”

“This initiative is a grace given me by the Lord, because having studied for so many years the questions regarding the causes of poverty, in this way I had the possibility to experience them.”

The non-profit organization O Viveiro offers 20 very poor children—ranging from 10 to 18 years of age, mostly orphans, from the province of Tete in northern Mozambique—the possibility of studying so they can then join the work force.

This association works in one of the poorest regions of Mozambique—poor, because it is impoverished due to a lack of development. It is the paradigm of poverty, because it is located in Sub-Saharan Africa, and women already begin to bear children at the age of 12 or 13; they are forced to marry prematurely.

The association’s center is directed by a married couple from the area, with a Christian education.

Flaminia explains how important it is that this center be directed by local people, because “they know the mentality of the locals, and this allows us to know what we can do, because in order to do good, we also need to know how to do it right.”

“Here, I have been able to see how the Gospel makes the difference: in these places, you touch it with your hand. The fact is, in these places, the institution of marriage doesn’t exist, nor that of fidelity… They are topics that they haven’t even heard of.”

“The association, through the spiritual and cultural formation of the girls it hosts, seeks, therefore, to offer them a possibility of being saved from this situation, a dignity that is otherwise denied them.”

At the end of a career, between joy and nostalgia

The end of Flaminia’s professional service at the Vatican is in sight. And now, looking back at her years of service, this woman with a great sense for the common good, notes the indelible mark that all these years of work/mission have left.

“I’m taking away with me a deeper faith, a sense of interest in social issues, concern for others and for society. I’m not just talking about the works of mercy; I would not have had this interest in society, in the common good, if I had not worked in this context.”

“Retiring, I will miss, every day of my life, the discipline of work, of doing things day by day, but above all the wealth of contact that I have had over the years, in particular with so many young people.”

Thinking about the future, she tells us these parting words: “I live day by day. I don’t know how I will organize my life in the future, but what’s certain is that I will place everything in the Lord’s hands: He will think of what to do with me!”

Read more:
An African pro-life activist’s passionate resistance against a culture of death