The remarkable Irish family who arrived in Texas, rescued a starving baby, and found a mission 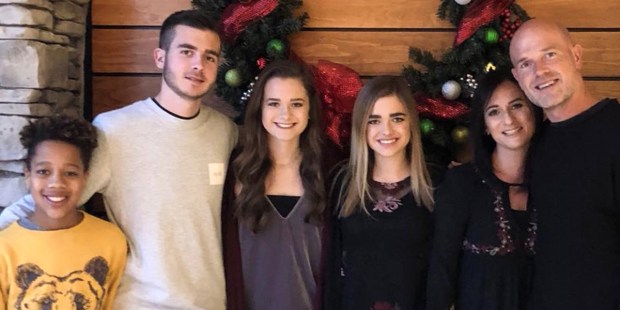 An abandoned three-month-old baby would lead the Walkers to a life they never imagined.

When the Walker family from Dublin wanted to start a new life in America back in 2005, they couldn’t have imagined that a startling discovery on the side of the road would change their family forever.

Just three weeks into their big move from the Emerald Isle, the couple came across an abandoned three-month-old baby, who was starving. They found the mother, who had been in foster care and wanted to avoid the system for her own child. She shared how she felt unable to cope with her baby at the time so the couple agreed to welcome him into their family on a temporary basis until the mom was back on her feet and ready to care for her child again.

A “babysit” agreement was legally drawn up and the baby, Isiah, was welcomed into the Walker family, meeting his new temporary siblings Jack, aged 7, Sophie, aged 5, and Elysia, aged 3.

“Our new neighbors and church community were so generous and helpful in quickly gathering the baby items we needed,” the mom, Debs Walker, explained in The Irish Times.

In the months that followed, the couple looked after the baby, and discovered that he was malnourished, having been fed just once daily since his birth. The little baby was also suffering from a respiratory disease, typical in premature babies, which left him in a lot of pain. This was not the straightforward start to a new life abroad the family expected.

Yet, as they adapted to their new home in Texas, an ill baby, and their own three children, the couple received a request from the baby’s mother; she asked them to adopt her son. The family said yes and embarked on the adoption procedure, which would bring them face-to-face with the hardships experienced by the many homeless mothers in Houston. “We saw the cycles of poverty that families are trapped in and how many of these homeless moms just can’t care for their babies, have no resources to help them, and the children are suffering so much,” Walker shared.

The now parents-of-four decided they should help. So they founded a Christian charity called 7More, offering help to those who’ve been incarcerated and facing life back on the streets. The charity simply asks: “What if everyone had a second chance?” It aims to put an end to the vicious circle of poverty that leads so many to crime and to re-offend, by offering support and guidance in the months following their release from prison.

The charity explains: “As the ex-offenders walk off the bus and through the Greyhound station, wearing their shame and the prison issue clothes and laundry bag, trying to avoid the stares and fear and condescending looks — they are met by 7more with a message of hope and strength and dignity.”

Walker also says that as these ex-prisoners, who are left at the bus station in droves, “are extremely vulnerable to human trafficking and also being preyed upon by gangs and dealers.” The charity questions: “Can we give them a chance at changing the destinies of their families?”

The couple’s charity work has become a full-time job, with no support from the state. Relying on charitable donations from churches, companies, individuals, and grants, the charity’s staff has come from all over the world, including a few fellow Irish people. As the couple battle to balance their own family’s healthcare bills, they are still devoted to helping those in need, and preventing any other women from needing to relinquish their babies because of their circumstances.