The favorite native sons of the Swiss: These colorful defenders of the pope make their country proud 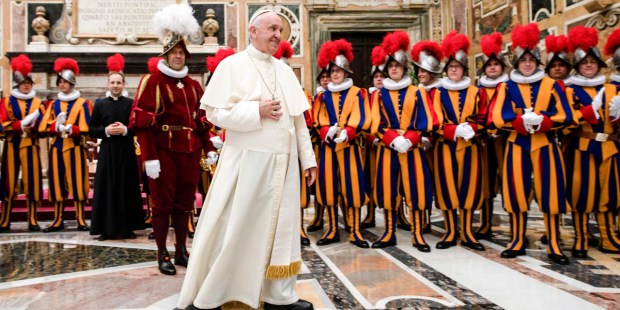 The “professionalism and loyalty” of the Swiss guards arouse particular pride among their fellow citizens, says Pierre-Yves Fux, Switzerland’s third ambassador to the Holy See since the establishment of diplomatic relations between the two states in 2004.

The diplomat spoke with I.Media on the eve of the annual swearing-in ceremony of new recruits in the Damascus Court of the Apostolic Palace on May 6.

What exactly is your relationship with the Swiss Guard?

The guards and their families form the bulk of the consular district I manage. These Swiss abroad, who are also temporarily citizens of the Vatican, are among the most assiduous to vote in many federal or cantonal referendums. Since there are only 110 guards, I am able to get to know most of them and develop a very personal relationship with them. Every May 6, the swearing-in of the new guards takes place before a prelate (the substitute or assessor). I officially attend alongside a representative of the Swiss Army. Quite often, this Swiss civilian witness is the President of the Confederation, come in person.

Is it still a matter of pride for the Swiss?

The Swiss see in the Guard the living memory of a glorious military past, linked to the birth of Confederation. Enjoying the trust of the popes for five centuries is a source of pride, especially for Catholics. But the professionalism and loyalty of the guards make the attachment to their institution transcend confessional boundaries.

What are the qualities of Swiss guards? Why do you think the Holy See continues to use them?

The existence of a long tradition, without the Swiss Guard ever failing in its duties, certainly plays a role for the Vatican. We cannot overlook the fact that Switzerland, like the Holy See, is a neutral State, if we consider that the Pontifical Guard is the means and manifestation of a sovereignty. What are the qualities proper to the Swiss? If each nation has its own character and “genius,” it should be noted that nowadays it is the personal qualities of each candidate that are evaluated. There is a widely shared advantage, all the same: our country is multilingual, and the Swiss quickly become polyglots.

The program, rich and precisely timed, begins and ends with meetings and interviews with the federal political authorities. He will spend most of his time at the World Council of Churches, an institution of international Geneva that Paul VI and John Paul II have already visited. There are scheduled talks, a meal, a common prayer. The part of the visit accessible to all is a big Mass in the Exhibition Palace next to the airport: we expect tens of thousands of pilgrims from Switzerland or neighboring France.

How do the Swiss react to the arrival of Pope Francis?

As with everywhere in the world, Pope Francis enjoys widespread appreciation in Switzerland. We appreciate his simplicity, which recalls that of our own ministers traveling in public transport, without a State residence or great decorum. His way of personally greeting the Swiss Guards at the Vatican obviously appeals to my compatriots, and my government appreciates, for example, his strong references to humanitarian law.

What opinion do Protestants have of the Pontiff’s next visit?

In 1969, there were demonstrations against the visit of Paul VI. The situation has changed dramatically through dialogue and cooperation between faiths. In 2017, in Wittenberg at the exhibition marking 500 years since the Reformation, the only Catholic-Protestant pavilion was also that of Switzerland! The non-Catholic Christians of my country, in all the variety of sensibilities, undoubtedly appreciate the ecumenical dimension of this visit. Pope Francis comes to Geneva accompanied by his “minister” for Christian unity, Swiss Cardinal Kurt Koch.