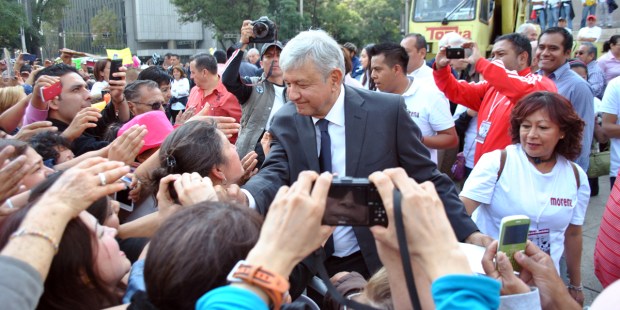 Lopez Obrador, former mayor of Mexico City, is ahead in polls.

With seven weeks to go before Mexico’s 2018 general elections, it looks like a man who lost the presidency twice before is going to win this time.

Andres Manuel Lopez Obrador, the former mayor of Mexico City, is polling at about 45 percent, with his closest competitor, Ricardo Anaya, coming in second at about 31 percent, followed by former finance minister Jose Antonio Meade at 18 percent.

Mexico elects its president with a plurality in a single round of voting. A candidate need not win more than 50 percent of the vote to be elected. The president serves for a single six-year term.

López Obrador, known popularly by his initials, AMLO, is the standard bearer of the relatively new MORENA party. The name is an acronym for Movimiento Regeneración Nacional, or National Regeneration Movement. Luis Rubio, chairman of the Center for Research for Development (CIDAC) in Mexico, said in a recent podcast of the Wilson Center Mexico Institute, where he is a global fellow, called Lopez Obrador a “typical 1960s-1970s PRIsta, someone who believes the government should be running everything, somebody who believes that the government can make the choices that society requires.”

Meade, 48, is the candidate of the Institutional Revolutionary Party, or PRI, the party of current President Enrique Peña Nieto. Anaya, 38, is heading a coalition between his National Action Party, or PAN, and the left-leaning Party of the Democratic Revolution, or PRD.

Most of the country’s legislature is also up for grabs this year.

“The main issues are the corruption and the violence here in Mexico,” said Bishop Alfonso G. Miranda Guardiola, secretary-general of the Mexican Episcopal Conference, in an interview. “We have a lot of crime. Every single day there are assassinations, especially in Guerrero, Mexico State, Tamaulipas. … We experience every day people who are kidnapped. … There are a lot of things we cannot support anymore, and the new president has to face them. We cannot support any more this kind of life. As Church, as citizens, we must change the atmosphere in Mexico. We must do whatever we need to do, all we can to change things here in Mexico.”

All of the candidates except Jaime Rodríguez spoke at the Mexican Bishops Conference’s plenary assembly in April. “We heard for half an hour [each] their proposals for our country. After we heard them we could have a very good dialogue with them,” Bishop Miranda said.

“The Catholic Church, concerned about the well-being of the people of Mexico, wants, in these upcoming elections, to promote dialogue and the participation of citizens, but above all, wants to contribute to the strengthening of confidence in favor of democracy,” the bishops said in a statement at the time.

Bishop Miranda said the Church is not worried about how the election turns out, even if a candidate who is considered “left wing” or one who supports legal abortion or same-sex marriage or other issues contrary to Church teaching is elected.

“We will stay here with our people, especially the poor people,” the bishop said. “We need to work with whoever wins, whether it’s Lopez Obrador or Anaya or Meade or whoever … We must make bridges, even here in Mexico, with the parties, the candidates, with all the people. Abortion, euthanasia, homosexual marriage, there are some subjects that we must face and search for ways to solve these.”

It was dissatisfaction with both the PRI government of Pena Nieto and the PAN government that gave rise to Lopez Obrador, according to Jesuit Fr. Matthew Carnes, an associate professor in the Department of Government and the Edmund A. Walsh School of Foreign Service at Georgetown University, and Director of the Center for Latin American Studies there. “People are really frustrated that they haven’t seen the kind of growth and inclusion that they wanted,” Fr. Carnes said in an interview. “They feel like Mexico hasn’t achieved its possibilities.”

Fr. Carnes said Lopez Obrador was “fairly effective” as mayor of Mexico City, from 2000-2006, and since then he has been a “kind of permanent opposition figure” in Mexican politics. “And now the policies he’s proposing are quite in opposition to what’s been happening. He seems to be harking back to a period when Mexico grew quite a bit in the 1960s, calling for more state role in the economy, to more lasting investment in businesses, for more of of a traditional role for labor unions, which would be stronger organizing bodies.”

Until recently, Lopez Obrador has been generally opposed to free trade, “although now, partly in response to President Trump’s rhetoric, he’s become something of a champion” of the North American Free Trade Agreement. Trump has been a steady critic of NAFTA, calling for its renegotiation.

While AMLO is seen as very much a populist candidate, Anaya “portrays himself as completely policy oriented,” Fr. Carnes said.

“He first came to my attention about a year ago when he came to Washington and gave these long policy speeches where he had every number down to the levels of trade, the levels of migration, just every little detail,” the priest said. He’s “someone who’s saying, ‘Look we’ve been too long into ideology, I’m going to be the person who comes in and set policies very closely in terms of clear technical solutions.'”

Meade, meanwhile, is “kind of a technocrat, someone who has been in government a long time, someone who most people would see as a kind of continuity with what the PRI has done,” the Jesuit professor said. “The PRI has been promoting kind of business-friendly policies in recent years; it’s been open to freer trade, has tried to really make Mexico ready to compete in the world—much as the PAN did too during their time in office.

But how would things change, depending on who is elected?

Two of the biggest issues that all three candidates are interested in addressing are corruption and crime, particularly the violence fueled by drug cartel activity.

“Lopez Obrador probably has the thinnest sense of a military or a police reaction” to that crime, Fr. Carnes said, “where Anaya and Meade would be more interested in a stronger criminal code, stronger judicial powers, a stronger sense of rapid responses to limit crime and try to lower the death count, which has just been so scary inside of Mexico and has really limited perception from outside of what Mexico can be.”

“All of them, I think, would continue to work with the United States, as past presidents have, to try to limit transit migration,” that is, the movement of migrants from South and Central America through Mexico to the United States, Fr. Carnes said. “Mexico has been an incredible partner with the United States in terms of working to both protect its southern border and work with migrants as they come through the country, in many cases to dissuade them or provide them with other opportunities inside Mexico.” Lopez Obrador would “probably be less eager to do as much of that,” he said, but he would be “surprised if that changed under Anaya or Meade.”

Bishop Miranda said that Mexico cannot solve the transit migration problem alone because the problem has to do not only with drug dealing but arms trafficking and the disappearance of people in Mexico as well. “There are a lot of criminal groups that kidnap these poor people and they are getting involved with criminal groups,” he said. “We need to solve this, but together. Just one country cannot solve this alone.”

But there has been concern over the “rhetoric President Trump has used” in regards to Mexicans, to Mexico and to illegal immigration, which has led to the cancellation of trips Pena Nieto has planned to Washington.

“Lopez Obrador is someone who would be ready to go head to head with President Trump,” Fr. Carnes said. “That, I think, would lead to more conflict. Anaya, I think, would be more level headed, to say, ‘Let’s work out the policies and not make this personal.’ … Foreign policy is not a major issue in Mexico most days right now. But the statements made by President Trump do become major issues. It becomes a point of pride when it’s asked, ‘How will the president represent us as people, especially when they are being disparaged or seen as all sorts of terrible things?'”

For Bishop Miranda, no matter who wins, the Church in Mexico is determined to keep working across the border.

“We must keep in touch with the American people,” he said. “We must work together and search for ways to improve our relations, in all kinds of matters: culture, education, migration. We must work on the immigration issue.”