Cardinal Sarah will be next to announce ‘Habemus Papam’ 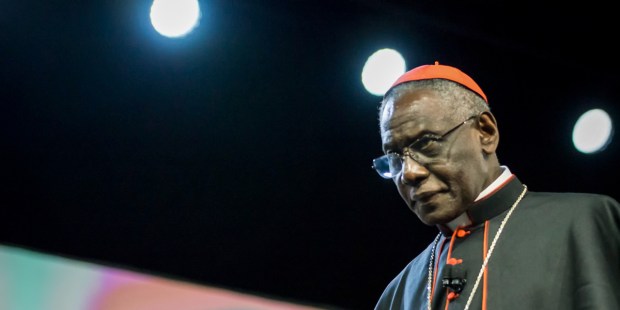 He is now the “proto-deacon” of the College of Cardinals

Cardinal Robert Sarah has become the “proto-deacon”: that is to say that in case of conclave, he will be responsible for announcing the name of the future new pope, and will thus pronounce the famous “Habemus papam” from the balcony of St. Peter’s Basilica, noted the newspaper La Croix on May 21, 2018.

That, of course, is presuming that there would be a conclave before his tenure as proto-deacon ends … and also presuming that he himself wouldn’t be elected the next pope!

Cardinal Sarah, 72, has become the eldest of the cardinals-deacon voters, following the consistory of May 19. The older cardinal-deacon, the Italian Raffaele Martino, is no longer a voter, being more than 80 years old. On May 19, Pope Francis made changes in the order of the cardinals, some passing from deacons to priests.

Cardinal Sarah is the prefect of the Congregation for Divine Worship and the Discipline of the Sacraments.

He is a native of Conakry, Guinea, and was ordained a priest of that archdiocese in 1969 and then made archbishop there in 1979. Since 2001 he has been serving in the Roman Curia.