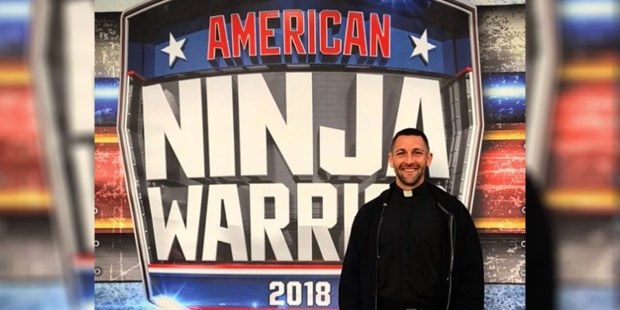 Father Stephen Gadberry will use the obstacle course as a stage for Evangelization.

We’ve gotten used to seeing religious vestments on talent show stages, but it was still a pleasant surprise to see that the 10th season of NBC’s American Ninja Warrior will feature a Catholic priest. Father Stephen Gadberry will test his physical fitness and obstacle acumen for a chance to win $1 million.

Father Gadberry was challenged to apply for the show by two-time ANW contestant, Sean Bryan, who became known as the “Papal Ninja” after competing while wearing a shirt with the nickname.

The ninja priest accepted the challenge, stating he “would be a bad steward of God’s gifts if [he] didn’t humbly and gratefully accept this opportunity as a moment” to proclaim the Gospel. He continued:

“[Evangelizing] is the primary reason for me doing this. The Lord tells us to go out and make disciples of all nations,” he said. “As this platform has stumbled into my lap…I can further deliver the message of the Gospel that I am supposed to as a priest.”

Father Gadberry is the pastor of two parishes in Arkansas: St. Cecilia Church in Newport and St. Mary Church in Batesville. Even pulling down double duty as a priest, this former military man still finds time to bring his ministry to a local prison, where he uses his expertise as a personal trainer to connect with inmates and initiate vulnerable conversations.

He told CNA, “The whole time, we are talking about life problems and struggles,” he said. “The guards loved it because they saw it was changing the guys I was working out with.”

In order to maintain his physical fitness, Father Gadberry exercises for 1-2 hours a day. He notes that these long workouts never come between him and his priestly duties, since he rarely watches TV.

As for the competition, Father Gadberry will meet it with a serene confidence which can only come from a priest:

“The whole mood of this ninja warrior thing is all about conquering obstacles. You’re not going to get the last obstacle, to hit the buzzer, until you get over the obstacle that is right in front of you,” he said.

“You have enough to worry about, so it doesn’t make sense to stress about the obstacles way off in the future. Just deal with the one you got right in front of you.”

Watch the 10th season of American Ninja Warrior on NBC, May 30th.