The atheist gets it wrong: What nature tells us about dying 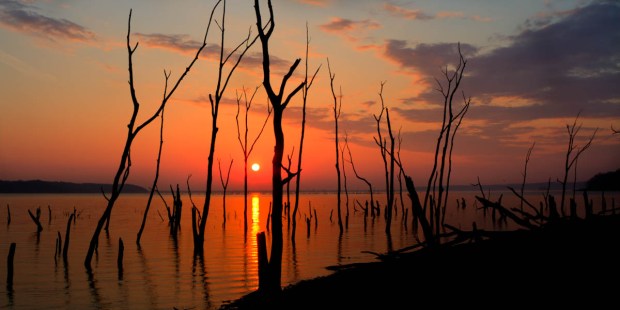 Chesterton’s insight into magic and magicians and a Father younger than us.

Grief is a treacherous thing. I started looking at the things growing green outside my window and thinking how it had all been brown and leafless just a few months ago. It’s a cheering thought that spring comes after winter. Then my mind threw me back to a day just two Junes ago when I felt the same thing, looking out my sister’s kitchen window, with her sitting a few feet away dying of cancer. (I wrote about her death here.)

I felt something of what the atheist must feel. The world doesn’t care you’re dying. The world will turn green, it will say “new life,” even if someone you love is losing hers. The seasons change, the stars move across the sky, the sun rises, whatever you’re suffering. Nature seems to say “You really don’t matter.”

The feeling passed quickly, but it was a gloomy minute or so. We do matter. For God so loved the world, etc. We see it in the creation of the world, in the Cross, the empty Tomb, in the Mass and in confession, in all the ways God cares for us, in the promise of the resurrection of the dead and the life to come.

And even in the ruthless cycles of nature. Nature doesn’t actually say, “You don’t matter.” We may feel like it does, but it doesn’t. The atheist gets it wrong. He makes a huge philosophical mistake. He assumes that nature is all there is.

The great Christian writer G.K. Chesterton explained this in his book Orthodoxy. He notes that “All the towering materialism which dominates the modern mind rests ultimately upon one assumption … that if a thing goes on repeating itself it is probably dead; a piece of clockwork.” He means by “materialism” what I mean by “atheism.”

The atheist will say, “It’s just the laws of nature.” The earth circles the sun. It spins around as it does so and roughly every 24 hours your part of the earth spins away from the sun and gets dark. A few hours later it spins back to the sun and gets light. A piece of clockwork, as Chesterton described it. The atheist thinks that settles the matter. The machine just does what it does.

The sun never tires of rising

Chesterton counters this. “It might be true that the sun rises regularly because he never gets tired of rising. His routine might be due, not to a lifelessness, but to a rush of life.” He uses children as an example.

A child kicks his legs rhythmically through excess, not absence, of life. Because children have abounding vitality, because they are in spirit fierce and free, therefore they want things repeated and unchanged. They always say, “Do it again”; and the grown-up person does it again until he is nearly dead. For grown-up people are not strong enough to exult in monotony.

Here’s the insight that shows up the atheist’s philosophical mistake. He assumes things that happen over and over must be impersonal and mechanical. He misses something, Chesterton says.

Perhaps God is strong enough to exult in monotony. It is possible that God says every morning, “Do it again” to the sun; and every evening, “Do it again” to the moon. It may not be automatic necessity that makes all daisies alike; it may be that God makes every daisy separately, but has never got tired of making them. It may be that He has the eternal appetite of infancy; for we have sinned and grown old, and our Father is younger than we.

Maybe things happen over and over again as an encore, the way we keep clapping for the band to come back onstage and play more, because we like the music so much. God sees what happens and calls nature to do it again.

This helped lead Chesterton to believe in God. Nature is not all there is. “I had always believed that the world involved magic,” he says: “now I thought that perhaps it involved a magician.” Philosophers and theologians will put it in more technical language, but Chesterton gets at the crucial truth.

God loves us. We matter, and we see that even though a sister sits dying while the trees turn green. For God so loves the world, that he makes the sun rise every morning and spring follow winter.

Read more:
10 science-proven facts that will help you be optimistic about the future