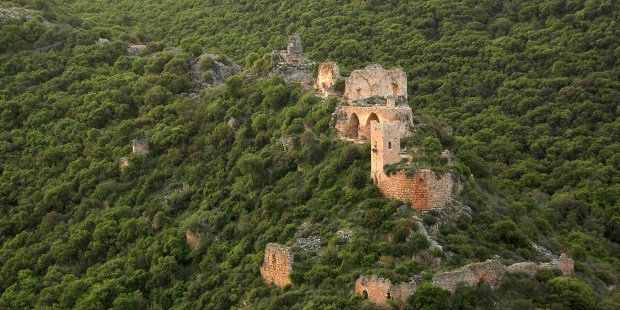 While some castles were built for war, it seems that Montfort, in Upper Galilee, was built for R&R.

There is a ruin in the Upper Galilee region of Israel by the name of Montfort Castle that was constructed in the mid-13th century by the Teutonic Order. Teutonic Knights were part of a German monastic order of Crusaders. Their primary function was to perform charitable services for Christians, such as starting hospitals and protecting Christian pilgrims on their way to Jerusalem.

During a recent excavation of Montfort Castle, archaeologists have found evidence suggesting the Teutonic Knights stationed there were not responsible for defending the region or bolstering crusading forces, which leads us to ask, “What was their purpose?”

According to Professor Adrian J. Boas of the University of Haifa, lead archaeologist of the dig, they were playing board games. The team discovered a set of pieces for the board game Nine Men’s Morris, a game that dates back to the Roman Empire.

Also found among the remains of the German castle were a workshop to make buttons, crossbow nuts, and other objects carved from bone, and a large amount of animal bones, including European pigs, which must have been imported to the region so that Crusaders would never be without pork in a territory where it was forbidden to Muslims and Jews.

Historians were treated to valuable data revealing how Crusaders dressed from the discovery of belt buckles and tunic buttons found at the site. There were, however, no pieces of armor found at the scene, aside from a few fragments of rusty chain mail. It’s a safe bet the castle was used as a place of relief and respite, rather than an active military fortress.

Out Feed Story describes what the site looked like in the 13th century:

The castle was richly furnished, with frescoed walls, beautiful hand-woven tapestries, vaulted rooms, gilded wood, stained glass, and luxurious apartments for the knights to live in. It’s a sprawling complex on the hillside, featuring stables, workshops, a castellan’s quarters, a chapel, and a massive great hall.

Professor Boas suggests that “the purpose of building this castle seems to have been to [house] some of the order’s administration, such as the archives and perhaps the treasury.”

The Teutonic Order may have been using Montfort Castle to hide from other crusading groups, like the Templars and the Hospitallers. Throughout the Crusades, all three of these groups fought among themselves, even as they all shared the same religion and goals. Thanks to the geography surrounding Montfort Castle, it is quite possible that Templar and Hospitaller forces never even knew it was there.