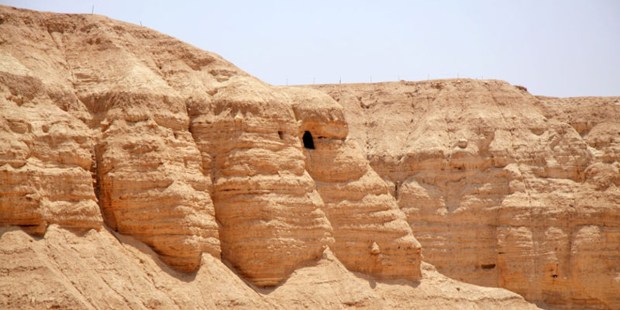 Officials race to find more caves before they are looted.

Archaeologists from Hebrew University were excavating a cave on the cliffs west of Qumran, on the northwest shore of the Dead Sea, when they discovered evidence that suggests it was once the hiding place of another Dead Sea scroll. The team of excavators are the first to discover a new scroll cave in 60 years.

The excavation was a joint effort among Hebrew University and the Civil Administration of Judea and Samaria, the Israel Nature and Parks Authority, and the Israel Antiquities Authority (IAA). The work was conducted under the new “Operation Scroll” launched at the IAA to undertake systematic surveys and to excavate the caves in the Judean Desert.

Excavation of the cave revealed that at one time it contained Dead Sea scrolls. Numerous storage jars and lids from the Second Temple period were found hidden in niches along the walls of the cave and deep inside a long tunnel at its rear. The jars were all broken and their contents removed, and the discovery towards the end of the excavation of a pair of iron pickaxe heads from the 1950s (stored within the tunnel for later use) proves the cave was looted.

Although there was no scroll recovered from the site, scholars recognize the overwhelming evidence of the scrolls’ presence and have suggested that it would be numbered as Cave 12. This is not the first time a cave has been numbered without finding an actual scroll; Cave 8 was similarly designated.

This exciting excavation is the closest we’ve come to discovering new Dead Sea scrolls in 60 years. Until now, it was accepted that Dead Sea scrolls were found only in 11 caves at Qumran, but now there is no doubt that this is the 12th cave. Finding this additional scroll cave means we can no longer be certain that the original locations (Caves 1 through 11) attributed to the Dead Sea scrolls that reached the market via the Bedouins are accurate.

Dr. Gutfeld went on to explain that they did find an ancient piece of parchment, but it was being processed and had not been written on yet. Other artifacts found in the cave include the jars in which the scrolls and their covering were hidden, a leather strap for binding the scroll, a cloth that wrapped the scrolls, tendons and pieces of skin connecting fragments, and more.

This is the first attempt by “Operation Scroll” to find new sites where Dead Sea scrolls may be hidden. The findings have shown a lot of promise for the initiative, which Israel Hasson, Director-General of the Israel Antiquities Authority, says is in a race against time:

The important discovery of another scroll cave attests to the fact that a lot of work remains to be done in the Judean Desert and finds of huge importance are still waiting to be discovered. We are in a race against time as antiquities thieves steal heritage assets worldwide for financial gain. The State of Israel needs to mobilize and allocate the necessary resources in order to launch a historic operation, together with the public, to carry out a systematic excavation of all the caves of the Judean Desert.