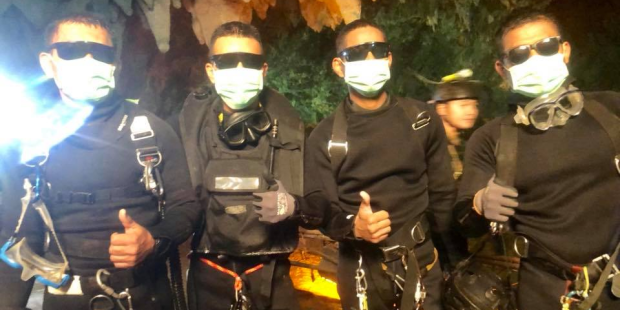 Soon after the last boy left the cave, the pumps broke down and the caves flooded.

The twelve boys of the Thai soccer team, the Wild Boars, are recovering nicely after being rescued in the 11th hour. Dr. Thongchai Lertwilairatanapong, the top public health doctor for Thailand’s northern region reported on Wednesday that the entire team was on the road to a full recovery. “None of them are stressed,” he added. “They took care of each other well in the cave.”

The Guardian reports, not long after the last group of boys was rescued, the remaining 100 workers and divers who had stayed behind to clean up the tons of equipment used were forced to evacuate quickly as the pumps gave out and the cave began to flood quickly:

The trio, stationed at “chamber three”, a base inside the cave, said they heard screaming and saw a rush of head torches from deeper inside the tunnel as workers scrambled to reach dry ground.

“The screams started coming because the main pumps failed and the water started rising,” said one of the divers, speaking anonymously because he is not authorised to comment.

“All these headlights start coming over the hill and the water was coming … It was noticeably rising.”

Over the last few days the boys have received vaccines for tetanus and rabies, as well as vitamins and antibiotics. Lertwilairatanapong noted that the boys needed no anti-anxiety medicine and credited the team’s coach with keeping their spirits high.

After much debate over how to remove them from the cave, the boys were finally extracted in three groups. The operation which lasted days was conducted by 19 elite divers and a team of volunteers who formed a human chain to help pull the boys out. The boys had to learn how to use scuba equipment and dive through cramped tunnels which the professional divers described as moving through the S-bend of a toilet.

Read more:
How Christianity is like one big Thai cave rescue

The weary boys made the 3.2 km trek through the flooded cave in various states of health, some of them were suffering pneumonia. The New York Times describes the current state of each group’s health:

Dr. Thongchai said the first group of boys, aged 14 to 16, had begun eating normal food and were now in “very good condition.” Two had contracted pneumonia in the cave but were getting better, he added, and a wound on one of the boys’ ankles had healed.

The second group of four boys, aged 12 to 14, were receiving antibiotics after blood tests showed high counts of white blood cells, a sign of infection, overexertion or exposure to cold, he said. But they were eating mild food as of Wednesday morning and might be able to eat normal food by the evening, he said.

As for the third group of four boys and the coach, one of them had mild pneumonia upon arriving at the hospital Tuesday, Dr. Thongchai said. He said blood samples had been taken from all five and would be sent for testing at a lab in Bangkok, the Thai capital.

The boy’s families have been allowed to visit, however since the boys are all still under quarantine, they had to remain 6 feet away. The team will be monitored for 2 weeks, the second at home. While they have not been allowed to play or have physical contact with each other, they share the same room so they can talk from their beds.

The New York Times also notes that while the boys were trapped they asked rescue workers for news of the World Cup tournament. Officials at FIFA have invited the boys to attend the World Cup Final in Russia, on Saturday. However, since they are still in quarantine they will not be able to attend.

The Thai Navy Seals shared this image on their website in celebration of the successful mission. Each animal represents another cog in the complex operation. ABC news gives the break-down of what each animal stands for.