A surprise: Pope Francis is going to officiate your marriage. Is that ok? 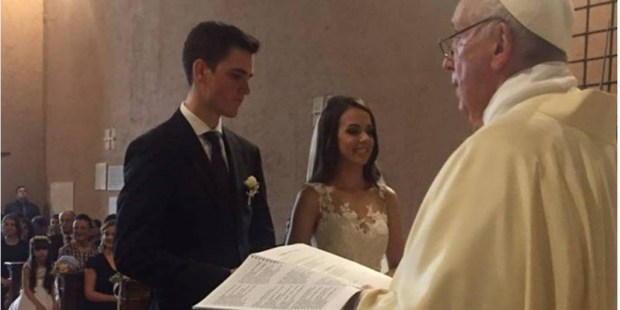 A surprise for the couple and for the priests who participated in the ceremony in the Vatican. And this is not the first time!

It was a surprise for the priests who attended the wedding of a young Brazilian woman and her boyfriend, a Swiss Guard, at St. Stephen Chapel behind Saint Peter’s Basilica, this past Saturday, July 14: Leticia and Luca thought that the ceremony was going to be celebrated by a bishop. But instead, they were informed: “Pope Francis will marry you. Does that work for you?”

“My friends, may God bless you every day on this path toward holiness. May your marriage always be fecund, and a testimony to family life,” wrote Fr. Arnaldo Rodrigues, a witness of the extraordinary event, on social media.

Pope Francis considers marriage to be one of the most beautiful things that God has created—as he said while talking about beauty during his Mass at Casa Santa Marta on May 25, 2018, during which seven couples who were celebrating their silver and gold anniversaries were in attendance.

“Matrimony is a silent homily for everyone else, a daily homily,” he said. Pope Francis had already celebrated various surprise weddings with inside and outside the Vatican.

Many will remember when he married two crew members on his flight to Iquique, Chile. The last day Pope Francis was in the country, he celebrated the surprise mid-flight wedding for two Latam crew members who came to him for his blessing.

Read more:
Some cultural context to help us understand the wedding the pope officiated yesterday

Pope Francis celebrated the wedding of a young deaf couple in the small chapel of the Santa Marta residence in the Vatican on July 9, 2016.

The pope presided over the marriage of Teodoro Pisciottani and Paulina Szczepanska, the daughter of a Vatican employee.

The spouses sealed their covenant of eternal love with Pope Francis’ blessing. It was a unique family event for them and their two young daughters.

The beauty of marriage

He also lamented how love is so rarely “in the news.” A couple “together for so many years… it’s not news. Scandal, divorce, separation – these are considered newsworthy. (Although at times its necessary to separate, as I said, to avoid a greater evil). The image of God isn’t news. But this is the beauty of marriage. They [the couple] are the image and likeness of God. And this is our news, the Christian news.” (Santa Marta, May 25, 2018)