Art and the Gospels: Who was St. Salome? 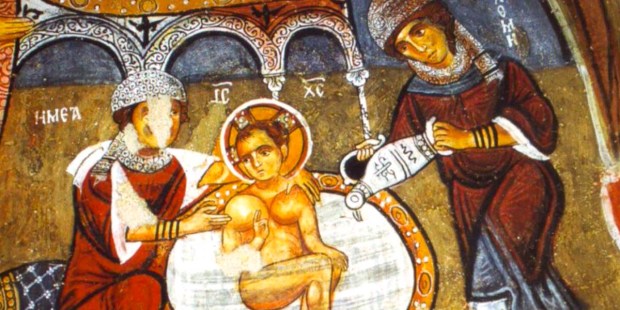 She was considered a saint from the early days of the Church, but do we really know who she was? Art might have some answers.

One can easily miss the presence of St. Salome in the Gospels and, hence, in Christian iconographic tradition. Not to be confused with the woman of the same name who demanded the head of John the Baptist on a silver plate, St. Salome “the disciple” is featured in canonical writings during some key moments of Jesus’ Passion. Some early medieval traditions claim she was one of the daughters of St. Anne (calling her “Mary Salome”), making her a sister of the Virgin Mary herself. Some other traditions claim she was the mother of John the Evangelist and James the Greater, two of the Apostles of Jesus. Different women also named “Salome” appear in plenty of non-canonical writings, adding more confusion over who she really was and how was she related to Jesus.

But confusion aside, two things are sure: first, that the name Salome is the Hellenized form of a Hebrew name, most likely “Shlomit”; and second, that she was considered a saint from the early days of the Church, most likely as a result of popular devotion.

In some early Christian apocrypha, Salome is mentioned as a woman who assisted Mary during birth. For instance, in the Protevangelion of James, one reads Salome was at first skeptic when she heard the news of a virgin giving birth. But her skepticism, the text goes, was soon turned into reverence as she met Mary and the Child, realizing he was the son of God. This is the reason why Salome often appears in Orthodox icons of the Nativity, as in this 12th-century fresco from the Byzantine Dark Church of Goreme Open Air Museum, in Cappadocia, Turkey. Here, Salome appears at the right of baby Jesus, pouring water into his bath. The woman sitting on the left is the midwife.

In Western iconography, Salome is instead often depicted as being the midwife who assisted Mary during birth. In this depiction of the birth of Jesus painted inside the the Scrovegni Chapel in Padua, Italy, by the great Early Renaissance master Giotto, Salome occupies the place of the midwife, sitting at the left.

But Salome is not only featured in apocrypha. In the Gospel of Mark, she is mentioned as being among the people who witnessed Jesus’ crucifixion.

“There were also women looking on afar off: among whom was Mary Magdalene, and Mary the mother of James the less and of Joses, and Salome.”

It is quite likely that Salome was also referred to, but not named, in the crucifiction description by Matthew (27:56):

According some sources, Salome was most likely the wife of Zebedee and, hence, the mother of the Apostles John and James. In this 1470 depiction from the Buhl Altar Piece, in the Church of Saint-Jean Baptiste of Buhl in the Haut-Rhin département of France, one can see Salome with a saintly halo across her head.

All Gospels agree in saying the first ones who learned about Jesus’ resurrection were women. Now, not all Gospels include Salome as being one of them, but her name is explicitly mentioned in the Gospel of Mark (16:1):

“And when the sabbath was past, Mary Magdalene, and Mary the mother of James, and Salome, had bought sweet spices, that they might come and anoint him.”

Mark then tells that upon arriving at the tomb the three women found that the stone had been removed. After realizing that the grave was empty, the women witnessed the apparition of a man wearing a white robe telling them that Jesus had risen and that he would meet them in Galilee. In this 18th-century Eastern Orthodox icon from Kizhi, Russia, Salome is depicted with the other two Marys, by Jesus’ tomb.