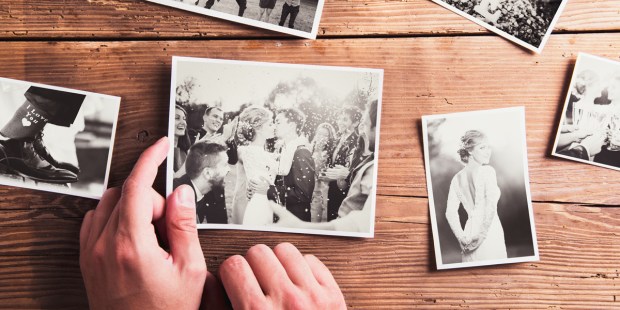 It could be that nostalgia causes more divorces than anything else. Does it have a similar effect on how we feel about Catholicism?

I once developed a theory that more marriages are lost to nostalgia than anything else.

It came back to me as I was reading disillusioned takes on the latest Church scandals.

One author declared that “the Catholic Church is a cesspool.” Another wrote longingly that he and his friends thought the problems in the Church would go away as older clerics aged, but that they were wrong.

I think both ideas misunderstand the Church. I blame nostalgia.

My worry about nostalgia started when I was taking the garbage out at one of the first places I lived as a married man.

April and I were in an apartment. We had a child. Money was tight. I was working in a high-stress job on Capitol Hill. Halfway to the apartment-complex dumpster one night a burst of voices and a scent of pine came from the trees across the street. Something about the smell and the noises together delivered a visceral memory of an afternoon in Golden Gate Park with college friends.

My sudden longing for my lost single life literally winded me. I badly wanted to be unconnected again, adrift in a sea of friends, with no one expecting me to do anything but laugh.

The truth is, the college life I lived in San Francisco A) was never as good as that memory made it and B) was not sustainable even as it actually was.

We too often judge real life against nostalgia, and find real life wanting.

A man once told me why he left his wife. “She never learned to cook a lot of the things I liked. She never embraced my interests. She did try, but she was tired and angry, not cheerful and loving like other men’s wives.”

I was astonished. Anyone could describe any spouse that way. What was he expecting? Clearly, he was expecting something — the nostalgia-drenched June Cleaver or Clair Huxtable, perhaps, or maybe a memory of his mother turned by nostalgia into the Essence of Wifeness.

Maybe he knew from Proverbs 31 and Theology of the Body that a wife should be a cheerful helpmate and heart of the home (just as a husband should be laying down his life for his wife), and decided to accept nothing less, all the time.

We all do this with the Church.

We all know what the Church is supposed to be like — the spotless Bride of Christ, the mother militant who is as tender as Florence Nightingale and as fierce as Joan of Arc.

We imagine that the Church has actually been like that — in the “see how they love each other” Early Christians, the chivalrous Medieval Christians, the burst of Renaissance beauty in architecture and liturgy.

Then we get disgusted — or even lose our faith — when the Church doesn’t look like that at all.

I hate to be the one to break it to you, but the real Church has never been what it should be.

From the very beginning, the Church was a “cesspool” of sin — the apostles betrayed Jesus, denied him, fled from him, and then got back together to fight over his legacy.

In every chapter of human history, the world’s worst sins have echoed in the Church. The factionalism in the ancient world gave us an Early Church characterized by its heresies. The violence of the Middle Ages included violence in the Church’s name. The French Revolution’s excessive anger was increased by the Church’s excessive abuses.

America is no better: Read pioneer accounts of Catholics and you discover the extent to which Catholics of different ethnic backgrounds didn’t trust each other at all (and shunned, and were shunned by, Protestants). Even the Church of the 1940s and ’50s, which nostalgia remembers as The Bells of St. Mary’s and On the Waterfront, is precisely the Church that would shortly begin hemorrhaging members who found it stifling and cruel.

When we long for the pristine Church of old, we are longing for a nostalgic vision that never existed.

What we need is an objective view — of our spouse and of our Church.

So rather than be shocked about the state of the Church now or in the past, think instead of what the Church really is.

The Church is its sinners plus its saints, its faults, and its Founder.

The Church’s legacy of sin and failure is accompanied by its legacy of holiness and history-changing success. In the worst of times, the Church has been the one place sin’s victims could restore their dignity by finding themselves loved infinitely by God in the sacraments, and the one place where sinners had a real chance at redemption.

More than that. The power of nostalgia is exhilarating — because it points to something true.

C.S. Lewis said that we know where nostalgia comes from. There really is a place where we can experience the core power of a reality without the dross of human fallenness. That place is heaven.

Nostalgia isn’t wrong — it is our heart’s longing for heaven. In heaven, we really will find Untainted Joy, Pure Freedom and the Essence of Love.

And in heaven, the Church really will be what we imagine it should be — or better, the dross will be stripped away from what the Church always was.