Salt Cathedral of Zipaquira: “An encounter with God under the earth!”

Photo Courtesy of the Cathedral

This wonderful Catholic church, unique in the world, was carved entirely in salt rock. It is visited annually by more than 600,000 tourists from 145 countries. Discover this place in images.

A tour of any of the Salt Cathedral of Zipaquira’s fascinating sections gives the visitor — Christian, atheist, or agnostic — a variety of sensations, from recollection, admiration, and mysticism to reverence, inner peace, and gratitude.

You would have to visit this place, located in the center of Colombia, to understand why a work built (twice!) in the depths of the earth is considered an architectural jewel of modernity. It even earned a spot in Ripley’s 2017 version of the book Believe It or Not!

The history of Salt Cathedral of Zipaquira is linked to the life of the Muiscas or Chibchas, an indigenous people who used the salt extracted from the region’s mines for their food and commercial exchange, long before the arrival of the Spanish conquistadors. Years later—as the manager of the Salt Cathedral, Raúl Alfonso Galeano Martínez, told Aleteia—these mines were dug by hand, but it was not until 1932 that a chapel was built in a sinkhole, due to the Christian devotion of the rural miners, and designs were made for a cathedral.

From the day of its inauguration on August 15, 1954, the first church was described as a “monumental and indescribable work that could only have been inspired by the power of God.”The data show it: the excavation was 80 meters deep, under a mountain of 400,000 square meters. It had six support columns of 80 square meters each; four naves that were 120 meters long, 13 meters wide, and 22 meters high; and a total area of ​​5,500 square meters with capacity for 8,000 people. Its most visited shrines featured images such as Our Lady of the Rosary of Guasá, patron saint of the place, better known as the Virgen Morenita, or the Dark-Skinned Virgin.

Structural problems caused by the industrial exploitation of the mine forced the closure of the Cathedral in 1992 and the construction of a new one that would not affect mining production and would guarantee full visitor safety. Of the 44 proposals examined, the design of the Colombian architect Roswell Garavito Pearl was chosen. He reused aspects from the old church and included other architectural, mystical, and religious elements that gave it a more majestic and ceremonial air.

This second cathedral, carved180 meters underground and inaugurated in 1995, has 8,550 square meters of space. One of its most breathtaking places is the Viacrucis, a journey of 386 meters during which you can pray, remembering 14 moments from the Passion and death of Jesus. The cathedral’s three fascinating naves, each 80 meters long, evoke the birth, life, death, and resurrection of Christ. In the central part is the largest stone-carved cross in the world, a sculpture measuring 16 by 8 meters that can be admired from different angles. Four columns were erected there, representing the evangelists Luke, John, Mark, and Matthew. An artist also carved The Creation, a sculpture that recalls Michelangelo and the Sistine Chapel.

Other admirable monuments carved by Colombians are La Piedad (the Virgin Mary holding Christ’s dead body), the Holy Family, an interior dome that rises towards the sky, the archangel, the chapel of the Blessed Sacrament, the narthex, and some labyrinths that represent the penances of the unbaptized. 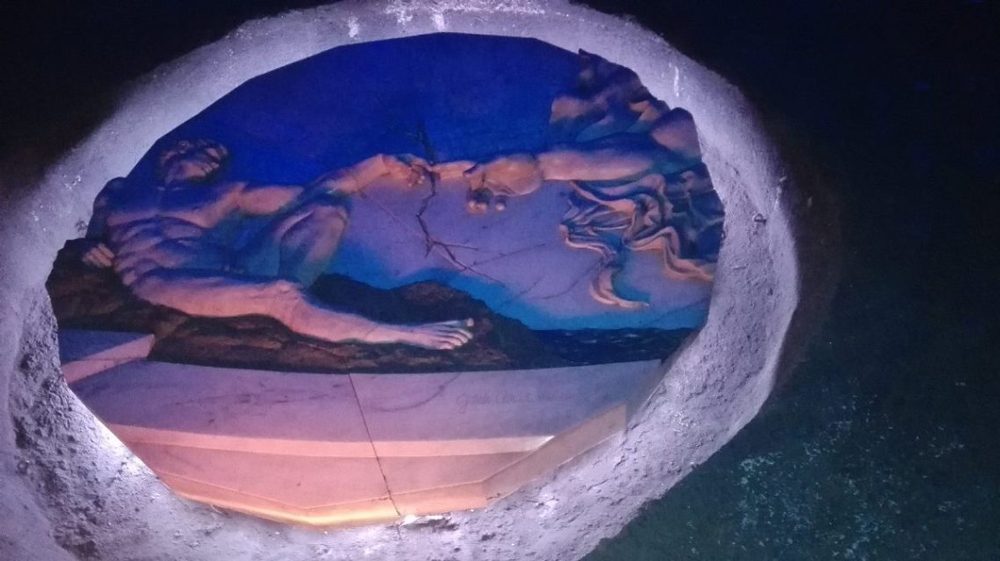 The Parque de la Sal, or Salt Park, where the “greatest marvel of Colombia” is located, has many attractions. One of them is the Ecological Path that shows the “green” wealth of the region; the Brine Museum, which shows the process of salt formation; and the Miner’s Route, an exciting activity that allows you to become familiar with the extraction of salt rock. In addition, there are visits to Zipaquirá, an historic city with colonial architecture. It is also where Gabriel García Márquez studied.

According to official figures, in addition to Colombians, more than600,000 people from 145 countries entered the Salt Cathedral in 2017.  That remarkable flow of tourists made Trip Advisor recognizeits cultural, architectural, and religious importance, awarding it a certificate of excellence for the fifth consecutive year.

Its religious significance is not only reflected in its name, the figures present there, and the symbols of Catholicism; it is also reflected in the very large Masses that are celebrated there during Holy Week and at Christmas. There are also well-attended religious music concerts. However, for many Catholics who have visited it, the faith of the visitors and the magnificence of the Cathedral can be summarized in a phrase repeated by the inhabitants of Zipaquirá: “An encounter with God under the earth!”