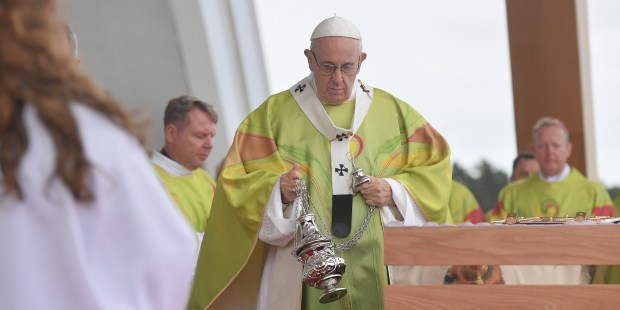 The Holy Father made a litany of apologies during the final Mass of his apostolic visit to Ireland.

In a visit that has been marred by the clerical abuse scandal in Ireland and abroad, Pope Francis began Mass on Sunday with a litany of petitions, asking forgiveness for the Church’s actions.

Below is the complete text of his opening prayer.

Yesterday I met with eight survivors who have suffered abuse of power, conscience and sexual abuse. Taking up what they said to me, I want to place before the mercy of the Lord these crimes and ask forgiveness for them.

We ask forgiveness for the abuses in Ireland, abuses of power, conscience and sexual abuses perpetrated by members with roles of responsibility in the Church. In a special way, we ask pardon for all of the abuses committed in various types of institutions run by male or female religious and by other members of the Church. We ask for forgiveness for those cases of exploitation through manual work that so many young women and men were subjected to. We ask forgiveness.

We ask forgiveness for the times that as a Church, we did not show the survivors of whatever kind of abuse compassion and the seeking of justice and truth through concrete actions. We ask for forgiveness.

We ask forgiveness some members of the Church’s hierarchy that did not take charge of these painful situations and kept quiet. We ask for forgiveness.

Lord, sustain and increase this state of shame and give us the strength to work for justice. Amen.

During his homily, the Holy Father kept his words focused on the readings at Mass and didn’t revisit the scandal.

At the end of Mass, it was announced that the next World Meeting of Families would be held in Rome, in 2021.

Read more:
In Knock, Pope calls for “firm and decisive” action in pursuit of “truth and justice”