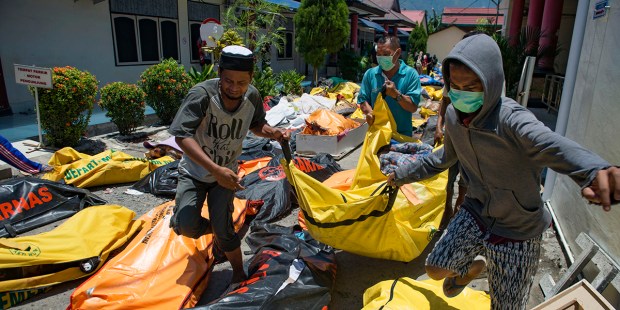 Victims include 34 children at a bible camp

A death toll that stood at 844 Monday morning was expected to rise as rescuers continued responding to Friday’s 7.5 magnitude earthquake and subsequent tsunami on Indonesia’s Sulawesi island.

Among the troubling news that has emerged is the death of 34 children at a church bible camp.

Dozens of people were reported to be trapped in the rubble of several hotels and a mall in the small city of Palu, 930 miles northeast of Jakarta, according to Reuters. Hundreds more were feared buried in landslides that engulfed villages.

Indonesian Red Cross spokeswoman Aulia Arriani told Reuters that a church in an area of Sigi, south of Palu, had been engulfed in mud and debris. Officials said the area suffered liquefaction, when the shock of the quake temporarily destabilizes the soil.

“My volunteers found 34 bodies,” Arriani said, “children who had been doing a bible camp.”

Catholic Relief Services (CRS) dispatched an emergency response team to Palu, the city most affected by the tsunami.

“Humanitarian groups are struggling to get people into affected areas,” said Yenni Suryani, CRS’ Indonesia country manager from Jakarta. “With the airport damaged, getting access to Palu and Donggala is a huge problem. Responders and local aid groups are having to drive overland 10-12 hours. That means a bottleneck for relief supplies in coming days. Landslides are hindering road travel in some places. There’s very limited electricity in Palu but power is out almost everywhere. Some mobile phone towers have been repaired allowing limited communication, but it’s unreliable.”

Suryani said that there was a “dramatic rescue operation” happening in Palu “as people are calling out from under the rubble of a shopping mall and hotel. Last night, witnesses reported seeing lights, possibly from cell phones, under collapsed buildings.”

CRS teams, deployed to support local partners in the area, are ready to address immediate needs with relief supplies, including tarps, blankets and sleeping mats and also sanitation and clean-up kits, the agency said.

“The lack of water and fuel will be an additional challenge. The closest reliable fuel points are hours from the affected area, and that will hamper reaching more distant communities and transporting relief goods,” Suryani said.

Indonesia is all too familiar with earthquakes and tsunamis, Reuters noted. A quake in 2004 triggered a tsunami across the Indian Ocean that killed 226,000 people in 13 countries, including more than 120,000 in Indonesia.

Apparently, warning systems set up after the 2004 disaster appear to have failed to alert people about Friday’s tsunami, which had waves up to 20 feet high.

“Disaster agency spokesman Nugroho told reporters on Sunday none of Indonesia’s tsunami buoys, one device used to detect waves, had been operating since 2012,” Reuters said. “He blamed a lack of funds.”