Why is Pope Francis wearing a rainbow-hued cross? 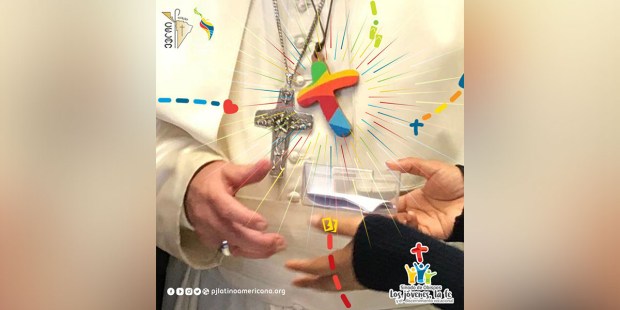 It’s not what you think …

This week Pope Francis wore a cross that had multiple colors on it that appear somewhat like a rainbow. Several traditional-minded Catholics posted it, assuming it was in some way related to the LGBT pride flag. However, that is not the case. It is a symbol of Latin American Youth Ministry.

Young people from Panama together with many synod fathers from Latin American delivered the World Youth Day cross to Pope Francis. The Holy Father greeted them joyfully and blessed them.

Several posts on social media immediately critiqued this: either implicitly or explicitly linking this cross to the rainbow flag usually associated with LGBT pride. (I am not linking to them to avoid giving them free promotion.)

Looking at the two, you will notice the color palettes are slightly different, and the orientation and placement of the colors are completely different:

The meaning of THIS rainbow cross

This cross has nothing to do with the LGBT movement. CELAM (the umbrella group for Latin American Bishops’ Conferences) developed this cross, and the organizers of WYD 2019 in Panama gave it to Pope Francis.

The CELAM site explains the cross:

The Cross of the Latin American Youth Ministry carries with it the colors that represent the symbol of YM,

Therefore, each color represents a region within our [CELAM’s] ministry:

Likewise, the shape of the Cross echoes the orientation of our continent. [i.e. Central and South America]

The colors represent the ecosystems that Latin America possesses: we have jungle, volcanoes, beaches and sea.

The cross was based on the logo for youth ministry across Latin America. Here is that logo, which displays the regions more clearly than the cross.

When we see the pope using a symbol, it is worthwhile to try to understand two things before critiquing. First, what is meant? And second, what meaning do those symbols have in that culture? In this case, the answer to the first is that it represents the coming together of Latin American youth from various nations and regions. Second, I don’t think the LGBT flag has gained as much of a foothold in Latin American symbology as it has in the USA. This cross is clearly not intended as an endorsement of LGBT pride. Period. Let’s be honest in trying to understand Pope Francis and other symbols used by Catholics in other parts of the world.

This article was first published at Patheos and is reprinted here with kind permission.