Heroic virtue hiding behind a shaved head and hoodie 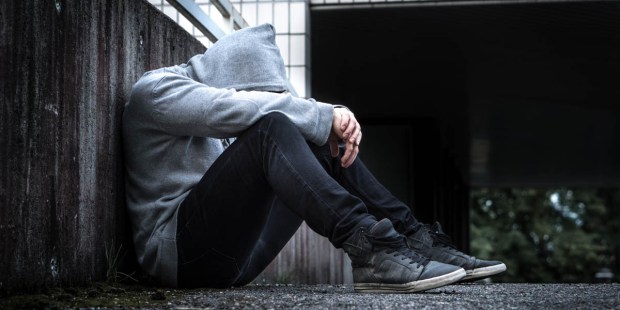 God is the only one who can see what effort we’re giving or withholding … but sometimes the rest of us get a peek too.

He was visiting, I thought. As he hesitated a few feet inside the door, I looked around for the grandparent’s face that would light up when they saw their grandson had come to join them. He looked about 20, wearing jeans and a hoodie, with a shaved head, his face a little doughy as if he didn’t get outside enough. Then a nurse said, kindly, “You can have this chair in the corner.”

I had come with a friend to the infusion room at the cancer center. The boy had not shaved his head but lost all his hair to chemo. He looked doughy not because he didn’t exercise enough but because he was being fed chemicals that attack the body in the hope of killing the cancer first.

The nurse helped him into the chair and then three of them took care of him. Usually only one nurse attends a patient. He sat next to us, about eight feet behind me, partly hidden behind a curtain pulled out a couple of feet from the wall.

One nurse went to the nurses’ station in the middle of the room to read his blood work. “Oh, that’s low,” she said to herself, and then called out a number. I think she said “platelets.”

She got up and walked over to him and said, in the voice of someone delivering bad news, “They may keep you overnight, till that goes up. I don’t know if they’re going to, but they might. I just want you to know.” From the way she said it, I think “might” meant “would,” and “overnight” meant “for a few days,” and I think the young man knew that.

Every time the nurses give someone a new medicine, one reads the label on the package while another checks it against the instructions on the computer. Their voices carry across the room. I knew from that the typical medicines and doses people were getting. The boy was getting more medicines at much higher doses than anyone else, while being by at least 20 years, maybe 30, the youngest patient in the room.

The average age without him was probably 65. No one wants cancer, but at least everyone else in the room had had years of life before they got sick.

The nurses weren’t as cheerful as they had been with the other patients, including my friend. They were more maternal, solicitous, soothing. They asked many questions, trying to see how he was getting along at home. He apparently lived by himself. One asked him how he liked a particular food. I could hear the shrug in his voice as he said, “Comes back up.” He spoke as if being unable to eat were inevitable, as if the nurse knew the answer before he gave it.

He answered the nurses patiently, but with almost no emotion or affect. He never said more than eight or 10 words at a time. He must have worked hard to respond. He never sounded cross, exactly, but he did sound like someone who only wanted to be left alone.

Sad, too, I thought, that he could not sound polite, he could not sound grateful. He was too sick to sound anything but sick. Politeness is a pleasure and so is gratitude, and the cancer had stolen it. It’s a kind of dance, I think, where for the things you’re given you give something back: your attention, your deference, your thanks. That’s not a mere formal gesture. It affirms the humanity and goodness of the person who’s helped you.