What to say to a mom after a miscarriage 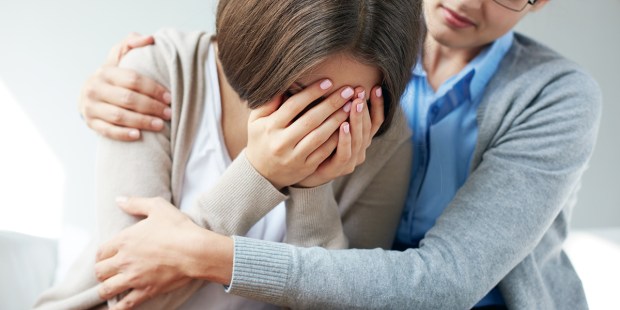 The little gestures and heartfelt words make a difference.

Two months ago, I went through my first miscarriage, losing what would have been my fifth baby after four relatively uncomplicated pregnancies and births.

Two months ago, I lay in a small room, my heart broken by the empty image lighting up the ultrasound screen.

Two months ago, my eyes were opened to an entirely new way to see the world.

Right after my miscarriage, I was overwhelmed with grief, sadness, confusion and even embarrassment. I felt like mourning my loss was somehow ungrateful when I have so much already. I struggled through my grieving process, not really letting myself acknowledge that my pregnancy was the same as a “real baby.” This type of loss meant that I never got to see my baby — no flickering heartbeat, no physical evidence that I had carried life within me — and I wasn’t sure how to classify my grief, if such a thing existed.

And then someone sent me a remembrance statue, completely unexpectedly and out of the blue, and I was taken aback by how much their thoughtful gift meant to me. I broke down in tears because a kind soul gave me a gift I couldn’t give myself — the chance to accept my baby and my loss. It felt so perfect and right nestled on our fireplace mantle with the pictures of my living children, all of my babies together, and I am so thankful I will have them all there now. I’ll never truly be able to thank the woman who gifted me with the gift of healing after my miscarriage, but I know I will never forget her.

In addition to our prayers, which mothers always want and need, human gestures like hers make a difference after pregnancy loss. I asked other mothers who suffered miscarriage to share the meaningful gifts and gestures from others that helped them find peace and healing:

“Last year I gifted a GlassyBaby to a friend in honor of a baby she lost,” says Gretchen Bossio, a mom of three from Seattle. Glassybaby, a company that designs handmade gift candles with the philosophy of spreading kindness, “names each color [design] and I chose the one called ‘Soul’ for her so she could light it and remember her little one. She has said often that it’s special to her and that her big kids love lighting ‘the baby candle.’”

When Erin Heger, a mom of an eight-month-son and an insurance navigator for a nonprofit health center from Kansas City, miscarried a pregnancy at eight weeks, she received a giving key from a good friend with the word “hope” on it. “I hadn’t heard of giving keys before, but thought it was a wonderful sentiment and thoughtful gesture,” Heger says.

3. A bouquet of thoughtfulness

Maggie May Ethridge, a mom of four and a writer, remembers a gesture that meant a lot after she miscarried a baby at 13 weeks. After being hospitalized for a day, she was surprised to find a card and a bouquet of flowers waiting for her at home from her co-workers. “That gesture meant an enormous amount to me and felt palpably comforting,” Ethridge remembers. “Having our pain and loss acknowledged by a societal structure — which could have just easily ignored it — was good. It was healing.”

4. Dinner for a week

Abbey Knight, now a mother of one daughter, was given a beautiful gift by her sister, who came over every day after work and made her sibling dinner for an entire week. She offered not just food, but companionship: “It was so nice to not have to use the little energy I had to make dinner,” Knight shares. “Having her come over also gave me something to look forward to.”

“My mom and dad bought us special angel ornaments for each of the grandkids with their birth year,” explains Amy Betters-Midtvedt, a blogger at Hiding In The Closet With Coffee. “The year I miscarried, they bought me a special angel statue at Christmas in honor of the baby we lost. This acknowledgement made me feel this baby was indeed ‘real’ and validated my grief in some way.”

Braunwyn Windham-Burke is a mother of six from Laguna Beach, California, who lost a twin during her pregnancy. She explains that she had originally decided to name her male-female twins Koa and Kali, but when her son passed, she decided to honor him by switching his name to her surviving daughter. After her son’s death, a fellow dance mom gave her a locket with his ultrasound picture on it and Windham-Burke wore it during her C-section with the twins. Although she says she hasn’t been able to bring herself to wear the necklace again, she keeps it nearby. “It’s close … always close.”

When Lynn Keman Keller, a spray-tanning salon owner from Vale, Oregon, miscarried, she received a lot of support from a friend who brought over a gift basket of “goodies” that Keller says contained everything from beer and candy to cinnamon rolls, which she had researched as being a helpful spice during a loss. “Then she stayed and talked to my husband and me for hours,” remembers Keller. “We reflected, we cried and laughed.”

The gift of time was so meaningful to Keller, who also had family members bring over dinner. “Which was nice since cooking was the last thing I wanted to do,” she notes. But by far, she says the “best” gift of healing came from her husband, who took her out for a drive to a local river for a special way to say goodbye. “We said our ‘I love yous’ to our sweet baby and tossed flowers in the river,” she says. “It was a very healing day to honor our baby. Today is exactly one year since we lost our sweet baby May.”

Although she didn’t receive a physical gift, Leah Outten, a birthmother of one child given up for adoption and a mother of four, now expecting again, felt like the emotional support she received after her two miscarriages was “priceless.” After her losses, she was also able to gift two friends who had suffered stillbirths with special remembrance items and knows that they made a difference in their healing.

“A few years back I was given a mustard seed necklace as a thank you for singing at a wedding,” says Kimberly Kelsch, a mother of one daughter and a part-time nanny from Illinois. “I stumbled upon it the day we found out that we had lost our first little one last year. Hours before finding it, our doctor had said how our baby would have been no larger than that. To this day I wear my necklace to give me peace, to remind me that our little one asked us to have such faith, and to feel that much closer to them.”

The day Nikki Ramsey Hootman’s daughter was stillborn, a local mom friend left her a potted plant with purple flowers on her porch with a simple note that said “I’m sorry.” That small gesture made all the difference to Hootman, 34, from the San Francisco Bay Area.

“That right there said it all,” she explains. “She knew there were no words to make it better, but she wanted me to know that she was thinking of me. And the fact that the plant was potted meant that I wouldn’t have to watch the flowers die. It was a reminder that no matter what, life would continue to grow.”

Big gestures and presents aren’t always necessary. Sometimes, the invisible support is the best kind. “My online support group was a lifeline,” says Tatiana Blackington James from Santa Monica, California. Babycenter offers online support groups for pregnancy loss, or you can turn to faith specific sites such as Catholic Miscarriage Support. Of course, you can also go offline and straight to your local parish to talk to your priest or ask for any local groups that might be available.

Rebecca S., a 44-year-old writer and mother of two from Denver, was forced to leave her office in the middle of her own birthday celebration because she was in so much pain. She was rushed to emergency surgery for an ectopic pregnancy and was grateful to wake up to many cards from her colleagues. But perhaps the gesture that meant the most to her was her boss coming to visit after her surgery. “I had such incredible support,” she says.

13. A little bit of everything

“I’ve had both a late miscarriage and a stillbirth,” explains Abigail Waldron, 36, from Northern Virginia. Like Nikki Ramsey Hootman, Waldron found that the flowers and baked goods and notes people left in those early days were meaningful. “I had two friends put together a whole Rubbermaid bin full of snacks and books and wine and chocolate and some little activities for my living daughters, which was so kind,” she continues. “I had a few friends give me jewelry from Etsy that represented both my living children and those I lost, which I treasure. And I also had a friend who donated money to a charity in honor of my child who’d died. All of these things meant so much to me and helped me feel less alone in some of the darkest days of my life.”

This article was originally published on October 15, 2016.