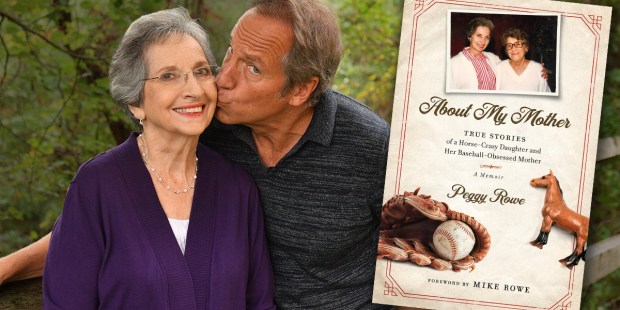 Peggy Rowe discusses her memoir “About My Mother,” America’s hunger for a feel-good story, and loving her husband of 58 years

Peggy Rowe may not be the most famous member of her family. That distinction goes to her son Mike Rowe, host of “Dirty Jobs” and Facebook’s “Returning the Favor.” But Peggy has become a celebrity in her own right, thanks to her warmth, humor and writing talent, which have now produced the best-selling memoir “About My Mother: True Stories of a Horse-Crazy Daughter and Her Baseball-Obsessed Mother.”

Not only is the book an entertaining read, it’s filled with the vividly-drawn characters of Peggy’s real life, along with demonstrations of how we can deeply love and respect even those people whose personalities are completely different from ours. And during our recent interview on “Christopher Closeup” (full podcast below), she revealed why she’s still head-over-heels in love with her husband of 58 years, John (aka “Prince Charming”).

Peggy has been a freelance writer for newspapers and magazines since 2002, proving that you can still pursue a new career beginning in your 60s. As Mike started sharing her texts and emails to him on his social media pages over the last few years, her popularity blossomed. An especially big hit was a video of Mike reading the story of Peggy losing her blue purse in Walmart. It was viewed by close to 100 million people.

With encouragement from Mike and his “little Facebook friends,” as she calls them, Peggy wrote “About My Mother” as a collection of essays and had it published by Mike. It sold out quickly, leading to a bidding war by major publishers who wanted rights to the second edition. Forefront Books won out, and Peggy can now lay claim to making it onto the New York Times Best-Seller List (and starting her own Facebook page) at age 80.

Peggy credits the book’s success to it being the type of story Americans are hungry for right now. She told me, “In this atmosphere of divisiveness in our country, people are sick and tired of constant battling back and forth and disagreeing and harsh comments. They want to feel good about something. My book is a feel good book. It’s about a family that really loves each other despite severe differences in temperament and personality.”

Those differences primarily stem from Peggy and her mom, Thelma Knobel. Peggy was born with a passion for horses. Regarding her youth in Baltimore, she recalled, “I galloped around the neighborhood as though I were a horse. I leaped over hedges and bird baths.”

Thelma, on the other hand, was initially hoping to raise a daughter more like herself. Peggy said, “My mother was from the south. She was refined, sophisticated. She liked the opera, the ballet. She was a meticulous housekeeper and very conscious of her style when she dressed. She had two daughters, and her goal in life was that her daughters would grow up to be refined young ladies. I don’t know that that’s what happened, but she did her best.”

Then, in 1954, an unknown side of Thelma arose when the Orioles started playing in her hometown of Baltimore. “My sophisticated, refined mother,” recalled Peggy, “[became] a baseball fan who shouted obscenities at umpires and threw underwear at the television set. It was such a complete about face. It was hard to believe that was my mother.”

And it wasn’t just a phase. At age 90, Thelma fell and broke her hip when she was at Peggy’s house. Despite being in excruciating pain, Thelma insisted that Peggy call the neighbors so they could carry her to the sofa to watch the Orioles game until the ambulance arrived.

Perhaps it was that wilder side of Thelma that eventually got her to accept young Peggy’s unique interests: “My first horse was the grapevines in the backyard. They were wrapped around a very sturdy pole, and my mother made me a saddle out of an old cushion and reins out of clothesline rope. And she blessed me. She put me on my horse and told me to go ride the prairie and that’s what I did. She eventually embraced my passion and even did what she could to make sure that I had access to a horse – which led to having my own horse.”

Interestingly, Peggy’s father, Carl, took his wife’s newfound passion for baseball in stride, underscoring the deep love the couple had for each other.

Peggy said, “I’ve never seen a love story quite like that of my parents. Both of them grew up poor and married during the Depression…They really didn’t have anything. My father was not extremely well educated. He went to the seventh grade and that was it. And education was so important to my mother. But she saw something in my father and encouraged him through the years to better himself. He did, and she was always at his side. And anything she did was fine with my father, right up until the time they passed away in 2005 and 2003. Her one wish in her senior years was that she would outlive my father so that she could continue taking care of him. She outlived him by two years. He was an invalid for the last 11 years of his life. He had glaucoma and had lost his eyesight, and he had had a stroke earlier on which left him very weak on one side. So she took care of him.”

In essence, Thelma was living out the virtues taught by her Christian faith. Peggy said, “I joke that our church was like a sibling. We lived just one block from the little gray shingled church, Kenwood Presbyterian. My father was the Sunday school superintendent as far back as I can remember. He was an elder. My mother was the president of the women of the church, and they were involved in every phase of the life and work of the church. We were there multiple days a week. It was just a big part of my life. And believe it or not, I’m still a member of that church. My husband, John, and all three of our children came through this church.”

Speaking of John (aka “Prince Charming”), Peggy admits that she was blessed with finding such a devoted, compassionate husband to whom she has been married for 58 years. And while Thelma wasn’t a fan of John’s when they first met, she came around.

Peggy noted, “I have said through the years that my husband is the best gift that I have ever given to my parents. He was the son my father never had. He was like a son to my mother, and he was there for them throughout their senior years especially. He and my dad were pals. Many was the time they went into the woods together with the tractor and two dogs and sawed down trees for the wood stove and the fireplace. When dad could no longer drive because of glaucoma and John had retired, every morning John would take Dad back to McDonald’s so that he could meet his retired friends. They had a wonderful relationship.”

John’s kindness and willingness to help others is one of the qualities Peggy admires most about him. She said, “It’s been good for me through the years to see his giving nature. In my house, if it’s Tuesday, it’s Meals on Wheels. He’s there right now because we’re recording this on a Tuesday. If it’s Wednesday, he’s volunteering at the oncology unit at our local hospital. Every Wednesday. In fact, we were supposed to go away on Wednesday for Thanksgiving, but we’re not leaving until early Thursday morning so that he can go to the hospital and help. It’s such a priority, and people are so appreciative.”

People who read “About My Mother” will also be appreciative. Peggy’s goodhearted, witty stories will not only bring a smile to your face, but remind you of the loving relationships that make life worth living.

Regarding her hopes for people who read the book, Peggy concludes, “I hope they are able to laugh, no matter what the circumstances in their lives may be. I hope that they can feel good about life in general, about our country, about family, about loved ones. I know this sounds syrupy sweet, but I just want people to feel good. And part of the reason I wrote about my mother was a comment I received some years ago. I had a story about my mother in the Baltimore Sun…so I got a lot of comments. One woman said to me, ‘Peggy, I want you to know that I cut out your articles about your mother. I’ve put them into a notebook, and I call it my happy book. And whenever I’m feeling down about something, I take out this happy book and I read it.’ I hope people will look at my book like that.”

(To listen to my full interview with Peggy Rowe, click on the podcast link):