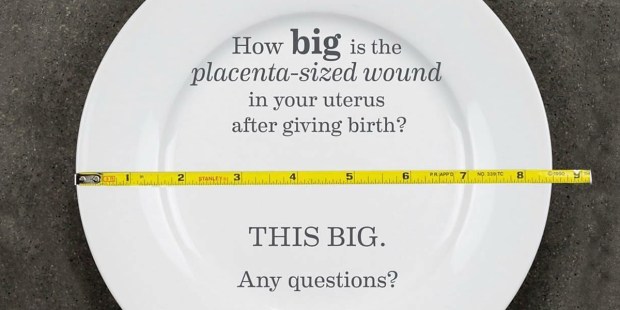 If you’re tempted not to take postpartum recovery seriously, you need to see this image.

If this meme were a poster in the hospital room where I stayed after giving birth, I would have felt a hundred times better prepared for the postpartum recovery period that I was facing:

When your placenta detaches from your uterus at birth, it leaves behind an open wound roughly the size of a plate! It is…

It’s just a dinner plate, but if I’d had that image in my mind, I wouldn’t have been angry at myself when, a whole 48 hours after giving birth, it was still difficult to walk across the room. At the very least, I wouldn’t have spent a day working up the courage to ask the nurses, tentatively, “Is it — normal to be this sore?” (Out of fear of looking weak, or worse, self-pitying, I hadn’t been asking for pain medicine as often as I needed it.)

Everyone knows that giving birth is hard, but there’s something about this visual that really brings the point home. The text accompanying the picture on Facebook asks,

“If this wound was on the outside of your body would you rest?”

Are you kidding? Not only would I rest, but I’d also stop feeling bad when people stepped in to help out. I’d stop worrying that my resting looked self-indulgent. That would have been a big deal — for me, and for a lot of women.

Women — and their families, and the world — see pictures like those famous ones of a picture-perfect Kate Middleton leaving the hospital hours after delivery, and assume that as long as you don’t have a particularly complicated or traumatic birth experience, then you should be able to bounce back quickly. But the truth is that even when we manage to look great on the outside, that dinner-plate sized wound is still there on the inside, and it doesn’t go away, just because you’re ignoring it.

Other cultures, traditionally, do take postpartum recovery more seriously than our modern, autonomy-loving culture does. In China, women spend up to a month after delivery on bedrest. In Latin America, there’s la cuarentena, a period of 40 days where the new mother can focus on healing and bonding with her newborn, and the community pitches in to help fill in the gaps. In fact, an analysis done on postpartum related studies spanning 20 countries reports that in almost every culture, “there is a prescribed period of rest of 21 to 40 days during which the mother is prohibited from performing her usual household chores.”

And here we are, beating ourselves up for not bouncing back to our pre-pregnancy energy levels (and jeans size) within days of giving birth. That’s why the dinner-plate picture is so validating. When we expect normalcy of ourselves too quickly, we end up doing more than almost any other society would even expect of us. Other cultures seem to be able to “see” this invisible, placenta-sized wound, and to respect it. It’s time we start respecting it here, too.