On rediscovering civility in an age of barbarism 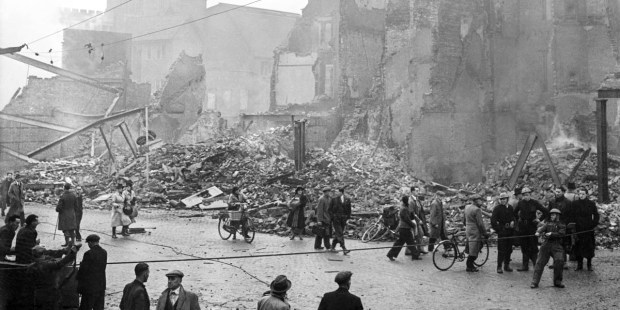 “Who does not prefer civility to barbarism?”

There is a beautiful book that I just finished reading by Alan Jacobs called The Year of Our Lord 1943. A proud little hardback, it sports a black-and-white dust jacket showing men wearing fedoras or flat caps and women in dresses walking earnestly while carrying baskets. This general milling about takes place amid the bombed-out shards of Coventry in the wake of a hellish Luftwaffe night raid during World War II. The twisted girders, charred brick walls and generalized rubble (piled two stories high at some points) is softened by the scurrying figures and bicyclists in trench coats, suits and ties. In the background, obscured by still-rising smoke, is the knife-like steeple of Holy Trinity Church. The book is aptly subtitled Christian Humanism in an Age of Crisis.

The story, told so well by Mr. Jacobs, is an essential one. It follows the strains of thought of five figures around the year 1943: Jacques Maritain, W.H. Auden, Simone Weil, C.S. Lewis and T.S. Eliot. Though their paths would seldom cross, they each found themselves thinking about the post-war world. In 1943, still a full year before D-Day and the invasion of Nazified France, the tide was beginning to turn against Hitler and his Reich. In 1940-41, Great Britain had withstood the Luftwaffe’s worst attacks in the Battle of Britain. The Soviet Union, once a Nazi ally, was in the process of pressing the Germans back westward with the help of countless Soviet soldiers and the harshness of a Russian winter. And the Americans, who once remained aloof with the promise not to send “our boys to fight in any foreign war,” were now gaining control of North Africa and the Mediterranean after Hitler’s ill-considered declaration of war following the Japanese bombing of Pearl Harbor. As a future without the menace of Hitler seemed increasingly assured, these five figures asked, “What would become of Western civilization?” It wasn’t altogether certain.

Just consider: The First World War decimated a generation and revealed a willingness to use science and technology in the name of pitiless barbarism. The 1929 crash of the stock market on Black Tuesday led to a crisis of confidence in the free market philosophy of capitalism and liberal democracy. Amid desperate times, many ran to the Strong Men of ruthless ideology: Mussolini, Hitler and Stalin. The Second World War brought death by the millions with civilian bombings, concentration camps and atomic weaponry. And what of Christianity? Beyond the voices of Pope Pius XI and XII and a smattering of saints and martyrs (Bonhoeffer, Kolbe, Stein), the Faith seemed shaken and silent. The world of World War II seemed trapped in the darkness of the Garden of Gethsemane and the Passion. There was little that seemed to promise a Resurrection.

But the Christian promise is that we are an Easter people. We are not unfamiliar with suffering and privation. But we are also familiar with an inexhaustible Grace that penetrates it like shafts of light through the darkest of thunderclouds. Hope is the edifice upon which our Faith is built, or as Chesterton would remind, “Hope means hoping when things are hopeless or it is no virtue at all.” And hope is what made Alan Jacobs’ five figures avoid despair. As they spoke and wrote in those years of receding darkness, the individual threads of their thought came together into a marvelous fabric of Christian humanism. But would it make a difference? Would humanity emerge from this carnage more deeply rooted in the truth of things that mattered? Or would we be a shell, a husk, of our former selves bent beyond recovery and only able to hold fast to the useful, the efficient, the expedient and the self-serving because the Truth, in our eyes, is dead?

Mr. Jacobs spends the entire book examining this question. And he does a wonderful job. But there was one insight by the English Anglican literary luminary T.S. Eliot that spoke acutely (though most striking in its subtlety) to the question of who we are and who we ought to be in the wake of the Second World War’s horror show. What is the distinguishing mark between barbarity and civility? For this, let us turn to a literary classic.

In Book VI of Virgil’s Aeneid, the Trojan warrior Aeneas and the beautiful Dido are in love. However, due to the sophomoric meddling of the Greek gods, Aeneas is compelled to leave Dido behind as he and his fleet of ships embark on an adventure to Italy. Distraught and heartbroken, Dido fashions what will ultimately be her funeral pyre and, atop it, thrusts a sword into her abdomen. It was only later that Aeneas, unaware of her death, would find himself shocked to encounter Dido’s shade (or ghost) in the underworld. And he weeps.

Tragic Dido, so, was the story true that came my way?
I heard that you were dead …
you took the final measure with a sword.
Oh, dear god, was it I who caused your death?
I swear by the stars, by the Powers on high, whatever
faith one swears by here in the depths of earth,
I left your shores, my Queen, against my will. Yes,
the will of the gods, that drives me through the shadows now,
these moldering places so forlorn, this deep unfathomed night —
their decrees have forced me on. Nor did I ever dream
my leaving could have brought you so much grief.
Stay a moment. Don’t withdraw from my sight.
Running away — from whom? This is the last word
that Fate allows me to say to you. The last.

Yet Dido would walk away, wordless, with her eyes fixed on the ground and “her features no more moved by his pleas as he talked on than if she were set in stony flint or Parian marble rock.” But that is not all, and this is T.S. Eliot’s point:

But Aeneas, no less
struck by her unjust fate, escorts her from afar
with streaming tears and pities her as she passes.

In what Eliot calls “the most telling snub in all poetry,” Dido not only neglects to acknowledge the earnest apologies of the stricken Aeneas; she also returns to the resting place of her first deceased husband, Sychaeus, testifying to Aeneas that she has an eternal devotion to another. Does Aeneas walk away jilted and embittered? Is the pain he felt for Dido’s death eclipsed by his wounded pride?

Instead, Aeneas follows her, “escorts her from afar.” He weeps for her. And pities her for what he (and the gods) have put her through.

It is not about him; it is about her. It is about the pain of another.

As Mr. Jacobs would write,

For Eliot, “what matters most” in this scene is not that Dido ignores Aeneas … but rather that “Aeneas does not forgive himself.” Though he does protest that he acted not according to his own will but in pietas, devotion to the “orders of the gods,” his primary feeling here, indeed the only one Virgil describes, is that he pities her for the “unkindly fate” inflicted upon her by those very gods. It is this pity that Eliot sees as the mark of civilization. Dido flees from Aeneas in hostility, but he refuses to respond in the same spirit; rather, he reaches out to her in compassion — he is genuinely stricken by what she has suffered.

This is the mark of civility that breaks the cycle of barbarism, of appetite, of pride, of self-absorption. To acknowledge that there is a right and wrong, to own that — at times — we are perpetrators of the wrong, and to have a deep contrition that gives rise to streaming tears and aching pity … that is to have civility in an age of barbarism. Forgive and be forgiven. Seek absolution and serve penance. Love and then do what you will. That is to truly love your neighbor as yourself.

Though Hilaire Belloc spoke of courtesy, let us apply it to civility,

Of civility, it is much less
Than courage of heart or holiness.
Yet in my walks it seems to me
That the Grace of God is in civility.

Now, let it be well lived.