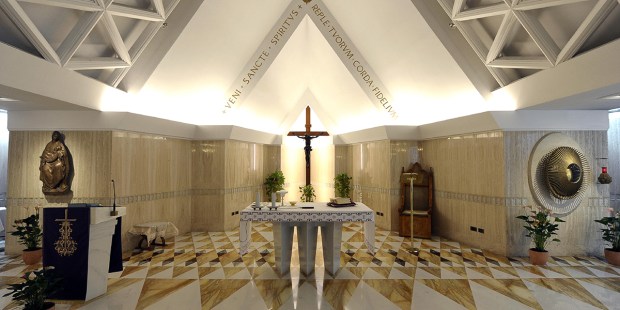 This small, sacred place is dedicated to the Holy Spirit and is decorated with a triangular motif, in reference to the Trinity.

St. Peter’s Basilica, the Sistine Chapel, and even St. Anne’s Parish are known by visitors and pilgrims in the Vatican. However, the tiny State also has other places of prayer, usually closed to the public. One of these is the chapel of the Casa Santa Marta, where the pope celebrates daily Mass.

Among the lesser-known chapels in the Vatican there’s one that receives nearly daily attention among the faithful: the chapel of the Holy Spirit, also known as Santa Marta in reference to the name of the residence where it is located. In fact, this is where Pope Francis celebrates his daily Mass. The homilies he preaches here go beyond the walls of the chapel thanks to the extracts that are published by Vatican News and transmitted by others.

Right from the beginning of his pontificate, Pope Francis decided not to move into the pontifical apartments in the Apostolic Palace; rather, he chose to live at the Santa Marta residence. This huge building was built in 1996 to the south of St. Peter’s Basilica, and was initially intended to provide lodging for guests and for cardinals during conclaves. Its rooms, comfortable but not ostentatious, have sober furnishings.

The Sovereign Pontiff  explained early on that the choice of this residence was guided, above all, by his desire to escape the solitude inherent in his role as the head of the Catholic Church. Living in room 201 at Santa Marta, the pope can have up to 130 “neighbors,” spread throughout the four floors of this ecclesiastical hotel.

Practically every morning, the Bishop of Rome celebrates Mass at 7 a.m. in the small chapel on the ground floor of the Casa. The chapel is located between the main body of the residence itself and the Leonine Wall. Approximately 50 people from among the Vatican’s employees might attend this Mass every day. People who are celebrating an important wedding or ordination anniversary may also request to participate.

Since 2014, at the request of the Successor of Peter, the Mass has been open to Catholics of Rome so they can pray together with their bishop. The priests of the Italian capital are in charge of asking permission to participate in the Eucharistic celebration with a group of their parishioners. Each day, this privilege is granted to a group of 25 lucky people.

The chapel, dedicated to the Third Person of the Trinity, contains many decorative elements that evoke the Holy Spirit. Above the altar is an inscription in Latin: “Come Holy Spirit, fill the hearts of your faithful.” The entire chapel is made up of triangular motifs, which symbolize the Trinity. Such is the case, for example, of the marble floor tiles, the colors of which echo the Vatican flag. The marble altar, the ceiling, and even the pillars throughout the nave are also made up of triangular motifs.

Along the right side there is a large window directly facing the wall that constitutes the border of the smallest State in the world; on the wall are representations of the the Stations of the Cross. On the left-hand side of the altar is a bronze statue of the Blessed Virgin holding her Son in her arms. Her head is turned towards the white marble ambo, where the pope preaches. Also worth mentioning is the presence of a small organ, a gift to Pope John Paul II from the Knights of Columbus in 1997.

This small, modern, silent oasis of peace is where the Vicar of Christ on Earth prays every day. Peter’s Successor not only celebrates Mass and preaches here; he also spends time here in silence at certain times throughout the day, especially in the afternoon, to meditate.