Do changes for Ukraine’s Orthodox Church mean unity with Catholics is on the horizon? 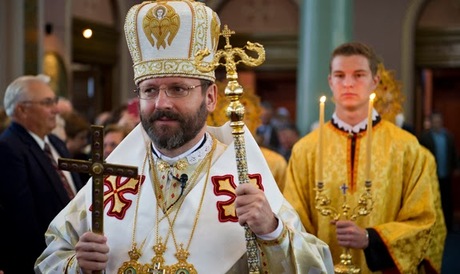 Major Archbishop Shevchuk explains what he meant when he called for creation of a single patriarchate including both Catholics and Orthodox.

In early January, the “first among equals” in the Orthodox Christian communion made a move that, while miffing his counterpart in Russia, was an important step of unity for Orthodox Christians in Ukraine. Now it’s being considered that this move might bode well for a further step of unity, this time between Orthodox and Catholics.

Ecumenical Patriarch Bartholomew of Constantinople granted a decree of autocephaly to a newly formed Orthodox Church of Ukraine on January 5. The new Church has the right to govern itself and elect its own leader, on par with 14 other autocephalous Orthodox Churches around the world.

Those efforts were renewed in the wake of Ukrainian independence from the Soviet Union in 1991 and intensified after Russian aggression in Eastern Ukraine and Moscow’s annexation of the Crimean peninsula in 2014.

Now, the head of the Ukrainian Greek Catholic Church (a Church in communion with Rome) has made bold comments about the possibility of Catholics and Orthodox belonging to a single Patriarchate of Kyiv, the capital of Ukraine and the birthplace of the Church in the Slavic East.

The Catholic primate, Major Archbishop Sviatoslav Shevchuk, in an interview with the Ukrainian news outlet Glavcom, said the creation of the Orthodox Church of Ukraine is “a wind of hope that we are moving into new circumstances and that new opportunities will be created for dialogue and concrete cooperation for the sake of unity in action.”

Read more:
What you need to know about the Orthodox-Catholic split and hopes for reunification

Apparently inspired by that movement toward unity, Major Archbishop Shevchuk—keep in mind, his Church is the largest Eastern Catholic Church in the world—wrote to the newly elected leader of the Orthodox Church of Ukraine, Metropolitan Epiphanius, on December 18, proposing the future creation of a “single Kyivan Patriarchate.”

The letter called the results of the “Unity Council” in which representatives of the three Orthodox denominations agreed on the creation of a single local Ukrainian Orthodox Church, an “important event that will enter the history of independent Ukraine as a great God’s gift on the way to the complete unity of the Churches of Volodymyr’s Baptism.”

Ukrainian Orthodox and Catholics both trace the founding of their Churches to the decision of Great Prince Volodymyr of Kyivan Rus in the year 988 to accept Christianity for himself and his kingdom. He received it from the Patriarchate of Constantinople. The Russian Orthodox Church, which developed later, also traces its founding to this key event, sometimes referred to as the Baptism of Rus.

“We live in one liturgical heritage, from the depths of beauty and God-inspired wisdom we draw spiritual strength,” Shevchuk wrote.

In the Glavcom interview, which was published in the wake of the granting of autocephaly, Shevchuk said, “We are looking for ways to restore unity within the now-divided Kyivan Church, which was once born in the baptismal waters of the Dnipro River. This is entirely within the context of the modern ecumenical movement aimed at the restoration of the unity of the entire Church of Christ, the convergence of Orthodoxy and the Catholic Church.”

An English translation of the interview appeared at the website of the Ukrainian Greek Catholic Church.

In a separate article, Shevchuk said that restoring communion between Orthodox and Catholic Churches is not about restoring certain structures or subjecting one Church to another.

“The highest sign of ecclesial unity is the Sacrament of the Eucharist,” he said. “Therefore, when we talk about finding ways to restore unity among Christians, we have in mind the restoration of unity in the faith, and therefore in its expression in liturgical life. Therefore, when someone breaks this unity, he breaks the Eucharistic Communion. This is what happened between Moscow and Constantinople, after the decision of our Mother Church [Constantinople] about granting autocephaly to the Orthodox Church of Ukraine.”

Asked what it means to “create a single Kyivan Patriarchate,” Shevchuk referred to a movement at the beginning of the 17th century in which certain leaders of the Orthodox and Catholic Churches in Ukraine sought to create a patriarchate that would be recognized both by Rome and Constantinople.

“We are aware that this kind of unity will be possible when the ecumenical process is crowned at the universal level by the restoration of Eucharistic communion between Rome and Constantinople,” he said. “This is not utopian thinking, as some people call it. This is the goal of the ecumenical movement. This is the fulfillment of the commandment of Christ, ‘that all may be one.'”

“We know that the maternal Kyivan Church, which is the common root of both Ukrainian Orthodoxy and the Greco-Catholic Church, reacted painfully to the division between Rome and Constantinople” in 1054, he continued. “For many years, the first hierarchs, the episcopate, the monastics, and the faithful of the Kyivan Church considered it a local conflict, a quarrel between the Latins and the Greeks. But later this division entered within the Church of Kyiv.

“And this is why today every effort must be made not only to overcome the division within Ukrainian Orthodoxy, but also to seriously theologize, pray, and work in order to restore the original unity of the Church of Kyiv in its Orthodox and Catholic branches. And just as the [Ukrainian Greek Catholic Church] carries the mystical ecclesiastical memory of the undivided Christianity of the first millennium. Although today we live in full communion with the successor of the Apostle Peter, we consider our Mother Church to be the Church of ancient Constantinople.”

Asked about what stands in the way of restoration of communion, Shevchuk said there are dogmatic issues “at the level of a certain ecclesiological doctrine, that is, the doctrine of the Church and its internal organization.”

“But today, there exists a search for ways to unite on the basis of studying the paradigm of relationships between the primacy of the Pope of Rome and Church synodality. It’s like digging a tunnel from two different sides, waiting for the two sides to meet each other,” he said. “In addition, we see that there is a certain fragmentation in the Orthodox world, and now there are attempts to gather it together. And the Pan-Orthodox Council in Crete in 2016 was just such a renewed instrument. That is, it was felt that for Orthodox Churches to respond to the challenges of our time, they needed some kind of universal authority or universal mechanism of unity.

“From the Roman side, there is talk today of the development of synodality and what is called healthy decentralization, proclaimed by Pope Francis,” the major archbishop continued. “And the last meeting of the Joint International Commission for Theological Dialogue Between the Catholic and Orthodox Churches was devoted precisely to this theme: the synodality of the Church and the primacy of the Pope. That is, how to reconcile, on the one hand, the territoriality of each Church and, on the other, to accept that the successor of the Apostle Peter—the Pope of Rome—has a certain mission as minister of Christian unity, its core, and the highest church arbiter.”