What does mercy look like? Young prisoners visited by the pope in Panama got a look 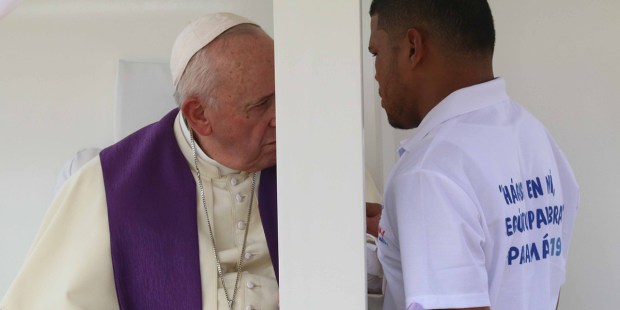 Francis tells them: “We all need the mercy of the Lord,” the pope as much as a criminal …

Pope Francis conducted a penitential liturgy at a juvenile detention center in Panama on January 25. A particularly powerful event, witnessing to these young people the mercy of God.

At the invitation of Pope Francis, tens of thousands of young people from all over the world are gathered in Panama. And yet, some young people from this country cannot join in the celebrations: those sentenced to prison. In this Central America plagued with violence, prisoners are numerous.

The Sovereign Pontiff, who always is calling for the care of those on the “existential peripheries,” could not leave them aside. Thus, for the first time in the history of World Youth Days, the pope went to a juvenile detention center to conduct a penitential liturgy. (While this is a first for WYD, it’s not a first for Francis, who has made prison ministry a hallmark of his pontificate).

By coming to the side of these young people, said Alessandro Gisotti, interim director of the Vatican’s press office, the head of the Catholic Church came to testify that these young people are “not separated from God’s love.”

A testimony expressed in words, but especially by the concrete gesture of a Sovereign Pontiff who chooses to hold an event to meet a few dozen prisoners rather than tens of thousands of pilgrims. As in the parable, the pastor left his 99 sheep to find the one that was lost.

The director of the prison noted how many of the prisoners refused to believe that the pope did not come only to Panama to see only the ‘good’ Catholics, but all the young people.

This division between ‘good’ and ‘bad’ believers is one that Peter’s Successor does not accept. The message of this liturgy, he explained, is that “we all need the mercy of the Lord,” the pope as much as a criminal, the young as well as the old.

The proof? Even Jesus’ apostles needed forgiveness, even as they lived with Him and saw His miracles. Indeed, out of 12 Apostles, recalled the pontiff, 11 committed the terrible sin of abandoning Christ to his Passion. And yet, continued the pope, Jesus went to look for them, “one by one.”

“All of us have a horizon,” assured the pope, because we are all part of the Lord’s family.

For Alessandro Gisotti, this very moving liturgy was a “visible experience of mercy.” Especially since the Catholic faith has an extraordinary tool to manifest what the pope referred to as the Father’s “extreme love”: the sacrament of reconciliation. With two other priests, the Bishop of Rome heard the confession of some of these prisoners.

Among them, said the director of the prison, was a young man who was a hitman for several years. One day, the family of one of his victims took revenge on his little brother. Imprisoned, this young man barricaded himself in his blind desire for revenge. Only when he learned that the Supreme Pontiff would come to meet him, did he begin to open up, says the Panamanian. When the big day arrived, this young man was able to go to confession with the pope. “When he finished his confession, he kept crying and repeating his desire to change.”

According to Francis, these young people’s desire for conversion must be accompanied, sustained, and supported by the whole society. It is necessary to “include and integrate” them, he pleaded. An appeal that the Panamanian state has heard; eleven of the young prisoners present during the penitential liturgy have had their sentences commuted, to allow them to pay their debt to society outside the walls of a prison. This is a courageous gesture from Panama, as a tribute to the visit of the Supreme Pontiff and his commitment to everyone, starting with the most excluded.