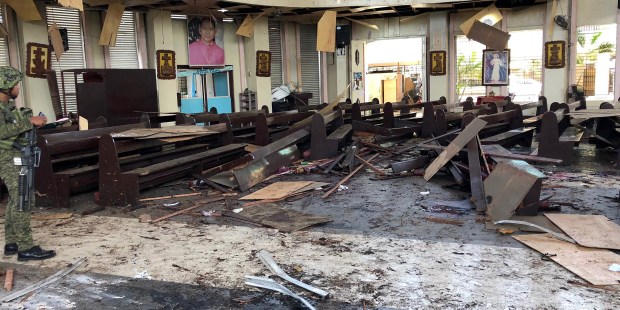 Philippines President Rodrigo Duterte today visited the site of a horrific bombing of a Catholic cathedral in the south of the nation which killed 20 people and left scores injured.

The twin bombing took place during Sunday morning Mass January 27 at the Cathedral of Our Lady of Mount Carmel in Jolo. The Islamic State has claimed responsibility, and Pope Francis condemned the attack.

The Associated Press described Duterte walking slowly into the bombed cathedral, where the wooden pews were still in disarray. “At one point he looked at the ceiling, where many panels were ripped off by the blasts,” AP reported.

The wire service explained that the attack occurred in the Sulu provincial capital on Jolo island, where Abu Sayyaf militants have carried out years of bombings, kidnappings and beheadings and have aligned themselves with the Islamic State group.

Duterte ordered the armed forces to crush the Abu Sayyaf. The group has an estimated 300 to 400 members, mostly in Sulu where it is holding several foreign and Filipino kidnap victims.

Duterte later met with families of the victims at a military camp in Jolo where coffins were laid side by side.

The dead include 14 civilians, presumably people who were attending Mass at the time of the bombing; five soldiers, and one member of the Coast Guard. Authorities are waiting for the family notification process to conclude before releasing the names of the victims.

According to Rappler and other media, an improvised explosive device that was left inside the nave of the church detonated—likely by a remote cell phone—at 8:58 a.m. local time. It was during the Mass’s Second Reading. There were about 100 worshipers in the church.

About 12-15 seconds later, as policemen and soldiers were rushing into the church, a second device exploded at the entrance, also apparently detonated remotely.

Members of the Armed Forces of the Philippines (AFP) had been tasked to secure the “inner perimeter” of the cathedral, police chief Director General Oscar Albayalde said at a press conference on Sunday.

Albayalde said investigators have not yet gotten pieces of evidence to indicate what substance was used for the explosion but did say that the explosive device was covered with “GI sheets”—metal sheets usually used to conceal IEDs. He said these GI sheets turned into shrapnel after the detonation.

He said the attack was probably not a suicide mission, as police at checkpoints outside the church would have caught anyone wearing explosives.

Rappler said that although the Islamic State group has claimed responsibility for the attack, the police and military are “still verifying the international terror group’s claim, given its terrorist agenda.”

In an interview on Monday, National Security Adviser Hermogenes Esperon Jr. said they are looking at 6 persons of interest based both on the CCTV footage and prior intelligence. His announcement was confirmed by Defense Secretary Delfin Lorenzana in a text message the same day.

Speaking at the concussing of World Youth Day in Panama, Pope Francis prayed for the conversion of “the hearts of the violent” and for “the inhabitants of that region a peaceful coexistence.”

During a press conference in Manila, Cagayan de Oro Archbishop Antonio Ledesma said the bombing “jeopardizes the peace process in Mindanao, especially after [last week’s] plebiscite on the Bangsamoro Organic Law, which in effect is really a peace treaty, a peace agreement, between the government panel and the armed groups of the Muslim communities.”

“We hope that this bombing of the cathedral will not sidetrack us, the majority communities of both Muslims and Christians, from the path of lasting peace through the Bangsamoro Organic Law,” Ledesma said, according to Rappler.

According to Fides, a Vatican news agency, the Bangsmoro Organic Law establishes a new region, the Autonomous Region in Mindanao.

“Although the overall results of the referendum have seen an overwhelming majority of voters approve the Bangsmoro Organic Law proposed by the government and already passed in Parliament, it should be noted that in the province of the Sulu Islands, where the island of Jolo is located, the majority of the population voted against the BOL,” Fides explained. “The new law will give a new structure to the region by establishing the Bangsamoro Autonomous Region in Muslim Mindanao (BARMM), which should correct the historical injustices committed against Muslims in the region (over 5 million) over the centuries. The new region, in fact, is a political entity that allows the populations a regime of self-government in tax and administrative matters, leaving the foreign and security policies to the central government.”