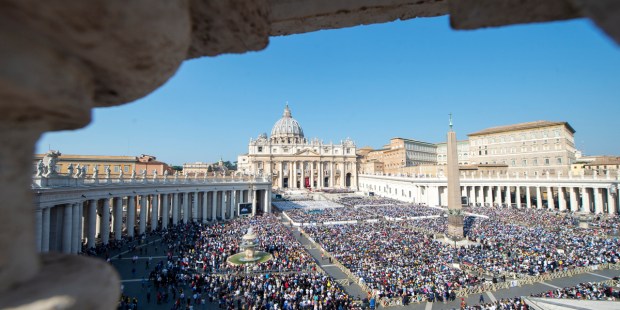 The Vatican is celebrating a big anniversary today. It is 90 years since the signing of the Lateran Pacts, by which the Italian government recognized Vatican City’s independent sovereignty.

Several events are taking place to mark the occasion, including a roundtable discussion scheduled for tomorrow at Rome’s Pontifical Teutonic College. The president of the Pontifical Committee for Historical Sciences, which is sponsoring the event, told journalists February 8 that the signing of the Pacts is an important example of cooperation and peace that is needed in today’s world.

At a Feb. 7 conference at Rome’s LUMSA University, Cardinal Pietro Parolin, Vatican secretary of state, said the Lateran Pacts ensured that the Church could continue its “role as a messenger” committed to proclaiming the Gospel and working to ensure “a dignified future for humanity.”

“The challenges today are the challenges of peace. In a world so fragmented and so conflictual, where the principle of multilateralism seems to be disappearing, the Holy See must continue to make its contribution to safeguarding the dignity of the human person and to building peaceful societies and nations,” Parolin said in an interview with Vatican News.

When he addressed diplomats accredited to the Vatican in early January, Pope Francis said the Lateran Pacts allowed the Church “to contribute fully to the spiritual and material growth of Rome and Italy as a whole, a country rich in history, art and culture, which Christianity had contributed to building.”

“On this anniversary, I assure the Italian people of a special prayer, so that, in fidelity to their proper traditions, they may keep alive the spirit of fraternal solidarity that has long distinguished them,” Francis said.

The Lateran Pacts are named after the Lateran Palace, the former papal residence, where they were signed on February 11, 1929. The Italian parliament ratified them on June 7 of that year. The Italian government at the time was led by Benito Mussolini as prime minister, It agreed to give the Roman Catholic Church financial compensation for the loss of the Papal States. In 1947, the Lateran Treaty was recognized in the Constitution of Italy as regulating the relations between the state and the Church.