“No red meat Lent” too hard? Here’s how the medievals did it 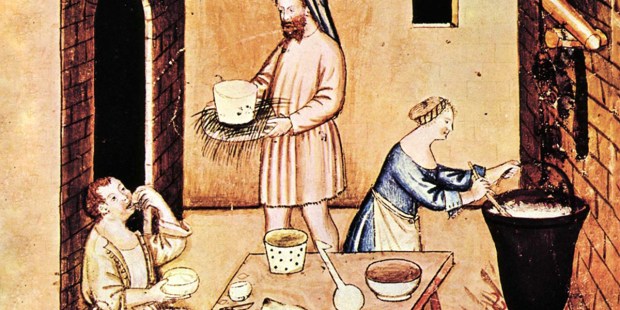 Here’s what they did for imitation meat in the Middle Ages before there was tofu.

Environmental activists have offered Pope Francis a donation of $1 million to the charity of his choice if he goes vegan for Lent, in a move to undo “the damage caused to people and the planet by animal agriculture.”

Pope Francis may abstain from meat during Lent as a matter of course. In any case, it seems likely that the Holy Father will refused to be “cowed” by the group, Million Dollar Vegans, demands. There are signs, though, if posts on Twitter are any indication, that giving up meat might be the cool Catholic thing to do this Lent. Not, presumably, because of meat’s possible effect on global warming (although that is certainly possible), but because meat is so good, and giving it up for 40 days would be a real sacrifice appropriate for the penitential period preceding Easter.

For those considering hopping on the “no red meat” bandwagon, here’s a look at how Medieval Christians went without meat for Lent and other abstinence days during the year.

Their rules were actually stricter — no animal products at all were allowed in those days. As intermittent vegans without access to tofu or Trader Joe’s, they had to resort to some pretty creative cookery.

As fish, and even aquatic mammals, were allowed, dolphin came in handy as a substitute for meat.

As Atlas Obscura notes, a cookbook from a 15th-century Austrian nunnery, as translated by Melitta Adamson, offers the following bit of advice: “From a dolphin, you can make good dishes. You can make good roasts from it … one also makes sausages and good venison.”

Beaver tails, like dolphins, were considered part of an aquatic creature, and therefore a substitute for meat during Lent. An illustration in Livre des simples médecines, from around 1480, shows a beaver with an actual fish for a tail as an illustration of this concept.

Medieval cookbooks list almonds as a useful ingredient as a substitute for milk, for making pastry, thickening sauces and even to create a Mock Hardboiled Egg. Atlas Obscura notes that the Harleian MS (circa 1430) called for blowing out the eggshell with a pinhole in each end, and then refilling it with a ground almond mixture colored with saffron to mimic the yolk.

The ancient English cookbook, The Form of Cury, compiled in about 1390, contained a recipe for Noumbles of Deer, a dish involving making a broth out of deer innards and adding a bit of vinegar, onions and bread crumbs to make a soup. Most helpfully, there is also a recipe for Noumbles in Lent, which seems to suggest using the blood and bellies of pike, cod and eels to make the broth:

FOR TO MAKE NOUMBLES IN LENT: Take the blode of pykes other of coungur and nyme the paunches of pikes, of congur & of grete codlyng & boyle hem tendur & mynce hem smale & do hem in that blode take crustes of white brede & strayne hit thorow a cloth & than oynouns y boyled & y mynced, take peper & safroun, wyne, vyneger other aysel other aleger & do ther to & serve hit forth.

Leopoldo Costa, at the blog Stravaganza, notes that “fish or crayfish meat, or sausages made from dolphin meat” were frequently molded into the shape of roasts. To achieve a convincing fake roast, chefs might cover the roast with ground gingerbread that had been fried or roasted. Egg white was also used to create the illusion of fat.