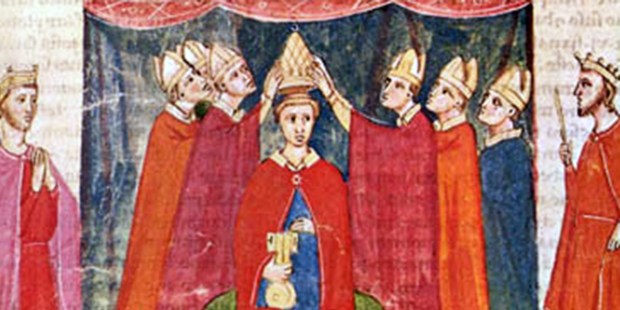 The phrase has its origins in the papal coronation ceremonies.

It’s not a very common expression nowadays, though every once in a while, a speaker or writer will use it as a pithy comment on the fall of a political figure or the downfall of a once-popular movie star or the financial collapse of a commercial behemoth. “Sic transit gloria mundi!”

The Latin expression, which means “Thus passes the glory of the world,” has its origins in Catholicism.

From at least the time of Pope Alexander V in the 15th century, the ornate and elaborate ceremony of a papal coronation included the phrase. As the new pontiff was carried around St. Peter’s Basilica, sitting in his sedia gestatoria, the throne that used to be carried by several men on their shoulders, the mighty procession would stop in three different places. A priest, holding burning flax, would chant in front of the pope “Pater Sancte, sic transit gloria mundi!,” reminding him—and the rest of the Church—of the transitory nature of worldly honor and glory.

Quite a striking thought amid the atmosphere of permanence in a place like St. Peter’s Basilica, with all the marble and gold and fine vestments. The cries of Viva il Papa! might resonate for a while in the cavernous cathedral, but even the Hosannas called out for Christ as he entered Jerusalem on donkey gave way to “Crucify him!”

Oxford Reference says that the phrase Sic transit gloria mundi was first used at the coronation of Alexander V in Pisa on July 7, 1409, and indeed, Alexander lived for less than a year after his crowning.

“It may ultimately derive from ‘O quam cito transit gloria mundi [Oh how quickly the glory of the world passes away]’ in the De Imitatione Christi of Thomas à Kempis,” says Oxford Reference, a website of Oxford University Press.

The last time Sic transit was used during a pope’s installation was in 1958, with Pope St. John XXIII. After that, the ceremonies began to be simplified. While there would no longer be this overt warning that he who occupied this powerful throne would one day “return to dust,” the ceremonies became markedly more humble. John’s successor, Pope St. Paul VI, was the last to be crowned and hear the words “Receive the tiara adorned with three crowns, and know that you are the father of princes and kings, the ruler of the world, the vicar of our Savior Jesus Christ on earth.” No longer being carried around on the sedia gestatoria, modern popes walk down the basilica’s aisle or ride the popemobile through St. Peter’s Square. They have many titles, but often, in word or in deed, they emphasize the one that calls them “Servant of the Servants of God.”

During the inauguration of Pope St. John Paul II, as cardinals came forward and  knelt before him to promise their obedience, he stood up as Polish Cardinal Stefan Wyszyński knelt down. John Paul, who had tremendous respect for his elder countryman, who had been imprisoned by the communists in Poland for three years, prevented him from kissing his ring, and simply hugged him.

At the installation of Pope Benedict XVI, instead of having all the cardinals successively kneel before the pope to do him homage, 12 persons did so—a mix of lay and ordained, representing the whole Church.